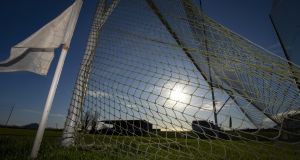 Coláiste Eoin will meet St Kieran’s Kilkenny in the Leinster Colleges Senior ‘A’ Hurling Championship final for the second successive year after their narrow two-point victory over Kilkenny CBS at the Laois GAA Centre of Excellence in Portlaoise on Wednesday afternoon.

The Stillorgan gaelscoil dominated exchanges initially and raced into a six -point lead by the end of the first quarter with Breandán Ó Scanláin and Dara Puirséil doing the bulk of the damage.

The lively Conall Ó Tuathail also chipped in with two points in the opening half but their momentum stalled with the concession of three frees in quick succession to Billy Drennan while the dismissal of Dónal Mac Duinnsléibhe compounded their struggles approaching the break, despite their 0-12 to 0-7 lead.

Crucially, they landed a telling blow within two minutes of the restart as Pádhraic Ó Luineacháin scored a wonderful goal from 15 yards, cracking home inside the bottom right-hand corner of Brian Minogue’s upright.

The response from Kilkenny CBS to this setback was admirable with Drennan and Aran Murphy catching the eye as they trimmed their arrears to a solitary point by the 52nd minute.

However, with Timmy Clifford finally seeing red after a number of injudicious challenges, Coláiste Eoin were able to regroup sufficiently to confirm their final spot through late scores from Puirséil and Ó Scanláin.