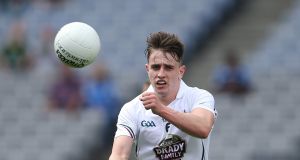 Former Kildare manager Cian O’Neill has revealed how he received a sneak preview of Normal People star Paul Mescal’s acting ability during a brief stint on the panel.

The Maynooth defender won a Leinster minor medal in 2013, captained the team in 2014 and then impressed with the under-21s.

O’Neill said Mescal “lived up to every expectation I had of him” and was poised to star alongside his father in a Kildare GAA fundraiser called ‘The Broadway Challenge’ over Christmas 2015.

But after several weeks of pre-season training the Lir Academy student at Trinity University had to leave the panel to concentrate on his career.

“It’s a funny story, Kildare had dropped down from Division 1 to Division 3 when I came in and the budget would have been quite low,” said O’Neill, currently coaching Cork. “The county board had to be prudent considering we were in Division 3 but I wanted to bring a backroom team in that I felt merited the level we wanted to take Kildare to. So we said we’d do some fundraising ourselves and we embarked on this Broadway Challenge, a musical.

“Players were grouped by region and were asked to get five friends or family together and to create a Broadway show. Paul is from Maynooth so there was a Maynooth and Celbridge group and one of the people they brought into their team was Paul’s father, who is an amateur stage actor.

“That was pretty exciting, even at the time we knew Paul was going places so here we had this future international star along with his very talented father.

“It was going along nicely but the pressure had come on him that it was basically either football or his acting career. I think there were a couple of major stage pieces coming up that he couldn’t risk being injured for so unfortunately about halfway through pre-season he had to make the decision to step away.

“If I remember correctly, he made the decision to step away because of the risk, which was understandable. So he didn’t get the chance to grace the stage for Kildare GAA.”

It also meant that Mescal missed out on gracing the greatest GAA stage of all, Croke Park.

O’Neill guided Kildare to the Division 3 final at Croke Park that April and they returned to GAA Headquarters twice that summer.

Mescal’s former minor boss Brendan Hackett said he was destined to be a star centre-back, like county legend Glenn Ryan.

“It was my first year managing Kildare so I held trials,” said O’Neill. “Paul would have been a standout player with the under-21s so he was selected for the pre-season squad.

“First and foremost, I was very impressed with his maturity, he was mature beyond his years for someone that young. Physically, he was very developed and very strong, he was strong in the tackle and a tight marker.

“I put him in the exact same vein as how I would have viewed Mark Dempsey coming up through the ranks in Kildare. Mark played every game in last year’s Championship. Who can say anything for certain but my personal belief is that Paul would have went on to have a very long and impressive career.

“If you talk to any county manager, they’ll tell you good full-back line players are a lot less prevalent than forwards or midfielders. It’s very hard to get good, quality inside defenders and Paul ticked all the boxes there. I certainly would have seen great things for him and a bright future, no question. His attitude was the primary thing, on and off the field, and his calmness in possession was remarkable, for a lad of 19 or 20.”

Mescal is still just 24 so has time on his side if he ever chooses to revive his inter-county career.

O’Neill, who also had successful stints with Mayo and the Tipperary hurlers, said: “It’s not as if he’s walked away from it totally. Acting is his priority but over the last number of years he would have been dipping in and out of club football. He certainly had all the skills and from watching him on TV this week he’s kept himself in good condition.”