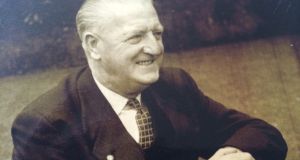 Eamonn O’Sullivan: ‘He was a great people motivator and he understood them. That expert understanding of the human psyche and what drives it was his real gift’

Only in Kerry would Mick O’Dwyer’s eight All-Irelands in 12 years entitle him to be just the county’s joint most successful coach. Leading the way was one of Gaelic football’s most influential personalities, Dr Eamonn O’Sullivan, who in the course of 40 years, also prepared – the concept of managing didn’t exist until O’Dwyer’s appointment in 1974 – eight successful teams.

During those four decades he dipped in and out of Kerry senior football – for instance, the county’s four-in-a-row, 1929-32, was guided by Tralee’s Jack McCarthy – but, remarkably in a county which has lost, as well as won, more All-Ireland finals than any other, O’Sullivan didn’t lose any until his very last match in charge, the 1964 clash with Galway.

If anyone in Kerry is asked to choose one of them, chances are that it will be 1955.

That All-Ireland drew a then-record crowd and caused British Rail to schedule extra trains to Holyhead because of the feverish excitement to see the match.

They would be up against the high priest of orthodox football. It didn’t end well for Dublin but the disappointment drove Heffernan to lead another revolution in the 1970s.

Eamonn O’Sullivan had a genius for getting the preparation of teams just right for big matches. This intermittent involvement has to be also seen in the context of a demanding career as a psychiatrist and, in time, resident medical superintendent (RMS) at St Finan’s Hospital in Killarney, one of the best-known psychiatric institutions in the country.

It also should be viewed through the lens of the team trainer – a designation that in Kerry always appears to carry more cachet than that of manager – who didn’t spend a whole year with the team but got them in shape for big matches.

Just 27 when he was first asked to get involved, his last final came barely two years before his death in October 1966.

Yet that’s such a skeletal representation of an extraordinary career, both sporting and professional, which guided and indoctrinated Kerry football along the path of becoming the greatest force in the game’s history.

He also got involved in athletics and became a pioneer of schools GAA, setting up within 18 months a county structure in Kerry and adding both Munster and All-Ireland bodies. Within a season the inter-county minor championship had followed.

In considering the GAA status of Kerry there is an indicator in the fact the two outstanding coaching manuals produced for football until the 1960s were both written by Kerry men – both, as it happens, from the same club.

Dick Fitzgerald, of Dr Crokes in Killarney, won five All-Ireland medals, captained Kerry in 1913 and ’14, and was a brilliant tactician. He managed the team’s transition from 17-a-side to 15-a-side and wrote the first GAA coaching manual, How to Play Gaelic Football, in 1914.

Over 40 years later, Eamonn O’Sullivan followed with The Art and Science of Gaelic Football, published in 1958. In the wake of Fitzgerald’s sadly premature passing in 1930, he would be instrumental in the development of the famous Kerry venue, Fitzgerald Stadium in Killarney, which for a long time was the second-biggest venue in the country.

His input to the project was unusual. O’Sullivan was asked, along with Crokes president Eugene O’Sullivan and former footballer John Clifford, to form the committee to commemorate Fitzgerald.

Despite local unease and outright criticism in some newspapers, he supplied patients to assist in the building of the new stadium. O’Sullivan’s attitude was that patients were better off working out of doors than being locked up inside the hospital. He wrote a widely acknowledged medical textbook on occupational therapy, based on his experiences working on the stadium, and was regarded as an authority on the therapy.

O’Sullivan was born into the GAA in Firies, between Killarney and Tralee. His father, JP – known as the Champion – was a successful athlete from Killorglin who led the local Laune Rangers club to become Kerry’s first All-Ireland football finalists – in the days when clubs represented their counties – in 1892.

His early death in 1909 came when Eamonn was just 11, and shortly afterwards the youngster was dispatched to Castleknock College in Dublin. He wasn’t there for long, as even at an early age his sporting preferences were established.

In a biographical note he prepared not long before his death and which is published in the late Weeshie Fogarty’s biography Eamonn O’Sullivan: A Man Before His Time, that decision is mentioned.

“I cannot even to this day comprehend the attitude of Irish educationalists who consider foreign football games can be a satisfactory substitute for the Gaelic code.

“It was therefore with great delight and satisfaction that I received news from the family that I was to leave Castleknock and suffer that famous and distinguished academy of learning and Gaelic football, St Brendan’s Seminary, Killarney.”

This change of school is significant in two respects: firstly it confirmed his commitment to football and, secondly, set him apparently along the road to the priesthood.

Although the vocation was not fulfilled, while a student in Rome he happened to attend lectures on psychology, which informed a lifelong and pioneering interest. That move into medicine at UCD after five years of clerical study confirmed the career choice, but also brought him a Sigerson Cup medal in 1924 – in what Dónal McAnallen, author of The Cups that Cheered (a history of the GAA at third level) reckons was the oldest team to win the venerable trophy.

His friend Phil O’Sullivan had become captain of Kerry and announced without much consultation that he had appointed O’Sullivan to train the county for that year’s All-Ireland. He took them to O’Grady’s Hotel in Tralee. And so it began.

Kerry at this stage had stalled as a contending county. Their previous All-Ireland came in 1914 and the 10 years since remains the longest drought since they started winning titles in 1903 until 1997.

Of course it was influenced by the political and military turbulence of the time and it is well documented that the team became a rallying point for reconciliation after the Civil War in the 1920s, although historian Richard McElligott, whose Forging a Kingdom tells the fascinating story of the first 50 years of the GAA in Kerry, suggests that familiar pudding has been over-egged.

“The traditional representation can be taken with a pinch of salt as there were plenty of tensions in that team because there was no shortage of people for whom the political divergence translated into personal coolness and animosity in some cases. Eamonn O’Sullivan comes in at that period.

“Because of his background in psychiatry, he was a great people motivator and he understood them. That translated very easily into preparing players mentally. That expert understanding of the human psyche and what drives it was his real gift.”

Players were taken away for the week or two before an All-Ireland for collective training but treated as individuals. Those who wanted a pint or a cigarette weren’t pressured into abstinence for fear of upsetting their mental focus and causing resentment.

“That was also an extraordinary Kerry team in the 1920s and there was an amount of media attention on them as the sporting embodiment of crossing the divide left by the Civil War.”

Tactically he believed in the zonal game: hold your position and move it on to the forward

The hallmarks of O’Sullivan’s philosophy are to be found in The Art and Science of Gaelic Football. It details preparation – collective training, two weeks in camp, with a daily schedule. The GAA banned the practice eventually because of a fear of breaching rules on amateur status, but it lasted until the 1950s.

“Coming into an All-Ireland you get the players into a training camp for a week or two,” says McElligott. “The Clare hurlers in 1914 and the Laois hurlers in 1915 brought that to another level, a kind of professional training. It was always there. Even in Kerry. It wasn’t a permanent thing – in 1924 Eamonn O’Sullivan comes in for 10 days before and has the team in a hotel in Tralee and mapped out a 24-hour programme for training the team.

“Tactically he believed in the zonal game: hold your position and move it on to the forward. There was the idea of the high press, the kick, catch and move it on. He stuck to that all the way.”

The tactical vision of highly orthodox, fixed-position play was designed to reduce clutter and back the player in one-on-one situations.

This footballing tradition invited tactical challenge but, until his last match, it was never beaten.