Westmeath hang on to beat Fermanagh despite losing a man 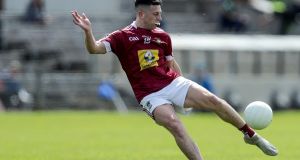 Westmeath’s Ronan O’Toole was on the scoresheet as they saw off Fermanagh. Photo: Laszlo Geczo/Inpho

Westmeath overcame the handicap of playing the last 25 minutes a man down to eke out a vital brace of National Football League Division 2 points when they defeated Fermanagh by two points in very difficult conditions for football in Mullingar yesterday.

The very strong wind always looked like it would make for a game of two halves, and so it transpired. The home team raced into a five-point lead with 14 minutes elapsed with scores from Ronan O’Toole, John Heslin (two frees), David Lynch and Callum McCormack.

A couple of ambitious Westmeath shots for goals generated no reward before Conall Jones slotted over Fermanagh’s only score of the half when he converted a 27th-minute free. Another Heslin free and a great point from Ray Connellan wrapped up first half scoring before Jason Daly produced a crucial save from Ultan Kelm in the 35th minute. Westmeath led by 0-7 to 0-1 at the break.

Driving rain made conditions worse on the change of ends. Heslin did well to slot over a tricky free to open the second half scoring. Connellan was wide from a great goal chance in the 42nd minute, and when his colleague Luke Loughlin picked up his second yellow card in the 48th minute, it looked ominous for Westmeath. However, Fermanagh were wasteful and four missed frees from very good positions were to prove very costly.

Ryan Jones kicked two great points from play, but the visitors could never reduce the gap to less than two points. Conall Jones converted a free in the 70th minute, but despite a late Fermanagh onslaught, Westmeath defended staunchly in the three minutes of added-time. Away fans were incensed that the referee failed to play more injury-time, but the losers’ profligacy ultimately cost them the points.