Weekend football previews: Meath return to the big time with trip to Tyrone 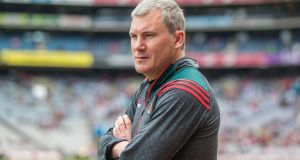 James Horan: led Mayo to the league title last season with a victory over Kerry in the final at Croke Park. Photograph: Tommy Dickson/Inpho

Division One
Tyrone v Meath, Healy Park – Back in the big time, Meath face familiar opposition. They’ve played Tyrone three times in the past seven championships and were very competitive. Mickey Harte’s team won an umpteenth McKenna Cup last weekend but are weakened in attack without Cathal McShane and Mattie Donnelly. Meath aren’t full-strength but have some decent new talent coming through. Watch out for Matthew Costello, still at school, but MOTM in the O’Byrne Cup win over Laois. Tyrone guile to prevail.
Verdict: Tyrone

Galway v Monaghan, Pearse Stadium, 2.30 – Pádraic Joyce’s new management has perked up the county after the Iron Curtain days of recent years but Galway still need to defend even if their attack is more conspicuously gifted. Also under new management with Séamus McEnaney back, Monaghan lost the McKenna Cup final but more bothersome was the injury to Colin Walshe. A year ago Galway froze Monaghan out at Inniskeen in a match before a chilled attendance. They can repeat the dose but perhaps by different means.
Verdict: Galway

Division Two
Westmeath v Clare, TEG Cusack Park – Clare’s survival in this division has been such a balancing act that the absence of Gary Brennan for the year poses existential problems. Promoted Westmeath are also missing important players including last year’s top gun Ger Egan, and know this is an opportunity for early points against, realistically, relegation rivals.
Verdict: Westmeath

Roscommon v Laois, Dr Hyde Park – After two years in Super 8s football, Roscommon should be targeting a quick return to the top flight. Laois though are on a third straight promotion and have Kerry’s Mike Quirke newly in charge. They are also missing some opt-out players and that enhances the home side’s prospects.
Verdict: Roscommon

Kildare v Fermanagh, Newbridge, 2.30 – Fermanagh beat Kildare last year and finished ahead of them but with a stiflingly defensive game plan. With new managers for both teams, the tactical balance may have shifted. Jack O’Connor will want to get the home side off to a decent start and they are capable of announcing their promotion credentials.
Verdict: Kildare

Tipperary v Down, Clonmel – Down took this narrowly in the summer and need to again even though on the road and under-strength. Tipperary are also missing big names and may struggle to break down the visitors.
Verdict: Down

Division Four
Antrim v Wexford, Glenavy – Paul Galvin opens with a tough road trip against a side with ambitions to secure promotion after a disappointing couple of years.
Verdict: Antrim

London v Sligo, Ruislip – Sligo go to Ruislip, trailing a terrible 2019 of nine straight defeats. London will fancy this and may get close.
Verdict: Sligo

1 French new wave stay on course for Grand Slam
2 Devin Toner: it ‘means the world’ to be back in the Ireland side
3 Irish pack must expose the weakness in England’s backrow
4 Ulster equal 21-game unbeaten home record with Cheetahs win
5 Crowning Glory: Three pivotal Ireland games at Twickenham
Real news has value SUBSCRIBE