Do Kerry have to lose before matches with the Dubs are regarded as classics? 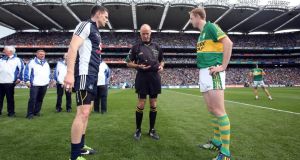 Maybe irritation is putting it too strongly but Kerry notice that the strand running through classic matches, including classic Dublin-Kerry matches is that they lose them.

Pat O’Shea, All-Ireland winning manager with the county in 2007, says that as he got the lift down in Croke Park on Sunday, a voice announced that the match they had just witnessed would go down as “one of the greatest of all time”.

“Why do you say that?” asked one of the fellow travellers.

“Because Kerry were beaten,” came the reply.

Comparisons
Comparisons have been made between the breath-taking semi-final win by Dublin at the weekend and the county’s victory 36 years ago at the same stage of the championship, a match that has become with the passage of time to be regarded as the greatest match ever played in the great era when the counties dominated football.

Echoes resonated at Croke Park two days ago with the big-screen tribute to two of the saga’s biggest names, who had both passed away within the past year, Páidí Ó Sé and Kevin Heffernan, the Dublin football icon whose managerial dynamic drew so much energy from the lifelong quest to lower the Kerry colours.

The win marked the first time that Dublin had recorded consecutive championship victories over Kerry since the fabled match in 1977.

O’Shea’s team six years ago beat Dublin in an exciting semi-final by two points, 1-15 to 0-16, but the match never attained the sort of status of its predecessor 30 years previously. He accepts that Kerry victories aren’t by their nature as newsworthy as Dublin’s in the fixture.

Kerry were also All-Ireland champions that year and controlled most of the match. They were hot favourites and confident.

“Deep down, Kerry felt that they’d beat Dublin. Even in 2011 Kerry were probably better than Dublin and controlled the game before Dublin came back at the very end, which was very dramatic and definitely one that got away from Kerry.

“In 2007 it was a cracking game. We looked in the ascendancy but Dublin got it back to point before we pulled away.”

He remembers the famous meeting of 36 years ago and says that whereas it’s impossible to compare teams from different times, the excitement of the semi-final was tangible and there was no doubt about the status of the teams.

“Preparation has to be seen in the context of the time. What set ’77 apart was that it was the essence of the game, with a great crowd, who played every ball, especially at the end as it bobbled off five or six different hands in the build-up to one of the goals.

“Micheál O’Hehir said in his commentary that you couldn’t breathe, that Croke Park had become a cauldron, a melting pot and that anything could happen.

“Both teams were at or near their peak that year and it was all-out pace until the end. It ebbed and flowed.

“At that time they were playing the game at a pace that was beyond most other counties. That was the game in 1977 but everything has to improve and there are more technically gifted players nowadays.

“The game has changed but I think people will be talking about Sunday in 100 years’ time and those present will say it was a cracking match to be at.”

Tom Carr played for Dublin in the 1985 All-Ireland final against Kerry and managed the team that drew the 2001 quarter-final in Thurles before losing the replay. It was another exciting clash but its impact was affected by the fact that having got over Dublin, the Munster champions were demolished by Meath in the semi-final.

Although accepting that Sunday was a terrific match, Carr is reluctant to elevate it above its predecessor.

“I don’t think that it was any better than ’77,” he says. “What tends to happen is that one blistering game tends to lead to a lot of excitement. The style of play was exciting and it was very entertaining but you can’t make comparisons between eras.

Fitness levels
“I’m not sure pure fitness levels have shot up much beyond then but the difference is all of the other work. Players are far better conditioned, stronger and faster. Look at the body shapes. In 1977 players are almost stringy but look at the jerseys on them now.

“Back then it was all man-to-man and the priority was to win your own battle; now you contribute to the system first – defending rather than marking.

“We’re also way more technically aware now than in the 1970s, ’80s and even ’90s. There’s far more analysis and breaking down the way teams play.”

He’s not making any claims for his team’s performance in nearly ambushing Kerry, who were only saved by Maurice Fitzgerald’s spectacular line-ball point at the very end – as featured in a current TV ad – but says the day was nonetheless memorable.

“It was very exciting – the second game not so much because we’d shot our bolt in the draw. Memories get awful blurred but if we’d swung it the first day the better team would have lost. Our challenge in the draw was all built on character and heart and if we’d won, it would have been a rob.

“But do people still remember Thurles in 2001? They do. It added to the Dublin-Kerry mystique.”

1 Tour de France: Every yellow jersey winner must feel guilty by some association
2 Matt Williams: The sky is not falling in on Irish rugby - but Ireland do need a new plan
3 Kevin Babington: Learning to live again after life changed forever on Long Island
4 Aaron Rai takes slender lead into final round of Irish Open
5 Clifford brothers to the fore as East Kerry retain title
Real news has value SUBSCRIBE