Storm Ciara makes for tough conditions across the country 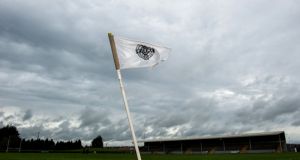 A busy day of action in the the EirGrid under-20 football championship across three provinces saw Dublin, Offaly, Galway and Derry master the tough conditions brought by Storm Ciara to progress to the latter stages.

Galway under-20 goalkeeper Cathal Flaherty proved the penalty hero in Connacht as his side advanced over Mayo in dramatic circumstances to set up a Connacht semi-final against Leitrim. Despite missing his own spot kick the goalkeeper quickly dusted himself down to save Oisín Mullen’s effort to decide the contest 3-2 in favour of the Tribesmen.

The pulsating encounter ended 0-14 to 1-11 after extra time in horrendous conditions in Castlebar. Galway levelled at the end of normal time and Matthew Tierney looked to have handed the Tribesmen victory when he struck for a goal in the first half of extra time. But Mayo’s Paul Towey landed his ninth point in total to bring the quarter-final to its exciting climax.

In Leinster, Offaly and Dublin are through to the final eight. Seán Courtney’s two-goal salvo proved crucial in the Faithful County’s victory over Louth. Courtney was a late addition to the Offaly side, with full forward Jack Bryant forced out with a late injury during the week after Leinster schools action.

Louth looked on course for victory with the wind at their backs when Carl Gillespie pushed them into an early lead. Courtney’s first effort against the run of play gave them a vital lifeline in the game. Gillespie would add to his tally to allow the hosts to lead 0-6 to 1-1 at the interval in Dunleer.

When Courtney expertly flicked a high direct ball into the square from Cathal Flynn, he levelled the game and wiped out Louth’s hard-earned lead. With the wind at their backs Declan Kelly’s side controlled the game and hit Louth on the counterattack.

Aaron Kellaghan, a son of former Offaly player Pascal, fired over three points in the finish. Louth would dominate possession, but were inept at finding their range against the conditions and all they could muster was a Ciarán Keenan free in reply. Offaly now play Kildare in a fortnight.

Dublin overcame an early goal in Aughrim to defeat Wicklow to face Longford in the next round. Eoin Darcy pounced in the third minute, but Adam Fearon was rapid in his reply in the next attack to a whirlwind start to the game.

Despite playing against the wind, Dublin would lead 1-8 to 1-5 at half-time. Rising stars Ciarán Archer and Luke Swan would add to their tallies after the break with Matthew Ging kicking both of Wicklow’s second-half points.

Elsewhere, Derry beat Fermanagh 1-13 to 1-8 after extra time. A five-point win was cruel on Fermanagh who looked on course for victory when Seán Cassidy powered them into early 1-5 to 0-3 ascendancy at half-time.

Derry gritted their teeth to draw the game level through Jude McAtamney dead balls and Alex Doherty’s goal would provide the misleading gloss in extra time.