Just a point separated the sides at the break, but Tyrone step it up a gear to win by five 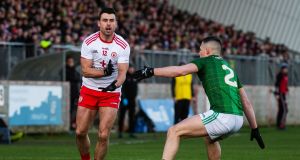 Darren McCurry shot 1-6 as Tyrone made Meath’s long-awaited return to Division 1 of the National Football League a day to forget.

Playing their first top flight game since 2006, the Royals endured a difficult afternoon at Healy Park, losing their shape and structure as energy levels dropped in the second half.

Just a point separated the sides at the break, but a strong Red Hand bench gave them an edge as they eased to a five points opening day win.

“It’s good to get early points and when you talk about home venue, you would think it meant something to you,” said Tyrone manager Mickey Harte.

“Maybe in the past we didn’t seem it meant too much to us, but there was a good effort out there today and this is the start of a new season and you try to start on the front foot.”

Meath troubled the home side in the first half, crafting two goal chances before Bryan McMahon did find the net after 15 minutes.

“Niall Morgan pulled off a couple of good saves, otherwise we would have been in a bit of trouble by half-time,” Harte conceded.

“The fact we were a point ahead by half-time having not played particularly well was encouraging. I thought if we went out and stepped up our performance in the second half we would get the result we wanted.”

Cathal McShane was an interested spectator at the Omagh venue on Sunday, just back in the country following a two-week trial with Adelaide Crows, his presence coming as news to Harte in the aftermath of his side’s five points round one success.

But the manager still hasn’t given up hope of having the Allstar full forward back in his team this year.

“I didn’t know he was back from Australia. I had been talking to him before he went out there and knew he was going out for 10 to 15 days at least.

“I didn’t know he was back and he didn’t tell me he had landed back in our world yet. I am sure if he is there, I will be talking to him during the week.

Meath are also missing a talented full forward in Mickey Newman, ruled out for the entire league following hip surgery.

“Mickey is gone. Shane (Walsh) is a couple of weeks away,” said Royals manager Andy McEntee.

“Seamus Lavin is a little bit further away. Padraic Harnan is further away again. Donal Lenihan is probably a couple of weeks away but that’s the way it is, that is the nature of the game.”

McCurry gave Tyrone a massive boost, smashing his shot to the net from O’Neill’s delightful assist on 10 minutes, but that was after Cillian O’Sullivan and Ben Brennan had spurned goal chances at the other end.

The Royals did get a three-pointer five minutes later, Bryan McMahon finding all the space he wanted to collect from Brennan and beat Morgan with a low finish.

The impressive Liam Rafferty pushed Tyrone into a 1-5 to 1-4 interval lead, and with the light breeze at their backs in the second half, and a greater level of defensive solidity, the home side dominated.

Meath’s first score from play of the half came from Thomas O’Reilly with 10 minutes to play, and as they tired, Tyrone were able to create openings with increased comfort, and scores from Bradley, McCurry, Kyle Coney and Niall Sludden secured the opening day points.