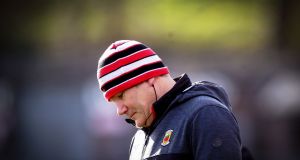 Tim O’Leary, the financier with whom Mayo GAA broke off relations last week, says that he believes the county didn’t want the remaining funds, believed to be about €250,000, raised by the Mayo GAA International Supporters Fund.

The MGISF is now being wound up with the money allocated to charities and individual sporting projects.

The county executive had taken the action last Monday after O’Leary had used Twitter to call for the dismissal of Mayo football manager James Horan in the wake of a heavy defeat by Monaghan – an intervention for which he apologised.

In a 10-point statement, released by his brother John, O’Leary’s generosity to Mayo GAA, fund-raising efforts and unhappiness at personalised internet trolling are all mentioned along with frustration at “the speed at which the whole world of GAA operates at”.

“The Mayo County Board made it very clear via a phone call to a well-known trustee on Tuesday after they released their statement that they were also terminating their relationship with the foundation and DID NOT want the money.

“For obvious reasons they did not want to put that into writing and instead let people make the wrong assumptions about Tim’s integrity and honesty.

“Tim’s choice was to repay the money to the donors on a pro-rata basis (most would have gone back to him) OR distribute the monies to charities and the Mayo ladies football team. I believe he made the right decision and he has started the process of disbursing funds as chosen by the trustees.”

When contacted, a spokesperson for the county executive said that he was unaware of such a phone call.

The statement also acknowledged the efforts of new county chair Liam Moffatt and treasurer Valerie Murphy “to move Mayo GAA forward”. The recently elected executive and O’Leary had announced a rapprochement at the end of January before the latest controversy.