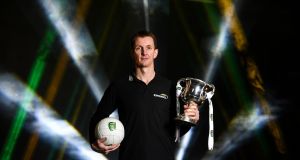 John Sugrue of Kerry at the launch of the 2020 EirGrid GAA Football U20 All-Ireland Championship at Croke Park. Photograph: Brendan Moran/Sportsfile

Throughout his two-year term as Laois senior manager, John Sugrue selected Stephen Attride as his captain. But now in charge of the Kerry under-20s he isn’t allowed to appoint his skipper.

In fact, just 21 days from Kerry’s first game in the Eirgrid Munster under-20 championship, a semi-final against Tipperary or Limerick, his captain still hasn’t been announced.

Not that he particularly cares and if the Laois based physio is totally honest, the drama over who gets to pick Kerry’s captains is much ado about nothing.

Kerry clubs voted by a small majority on Monday night to do away with the tradition of allowing the county champions to pick the Kingdom captain though the motion was defeated as it didn’t have the required two-thirds majority support.

So the process that led to David Clifford being honoured with the senior captaincy on the back of East Kerry’s success locally remains in place.

“There is no discussion about any other county captain but for some reason in Kerry it seems to draw huge attention and to be honest with you, I think it’s from those outside looking in, rather than those on the inside looking out, where the attention comes from,” claimed Sugrue.

“It doesn’t really bother me too much. We’ve had it in Laois where we pick our captain but down below in Kerry it’s a different system. We will work away with whatever’s in front of us. To my mind it’s all about playing the game and trying to get the results as best we can. These little logistical things don’t bother me too much.”

Sugrue’s under-20 set up is subject to the same ruling and despite his team being scheduled to play in the Munster semi-finals on February 26th, he hasn’t been informed of his captain yet.

“They will nominate who they feel and then we’ll proceed from there,” said Sugrue, who shook his head when asked if the captain is known yet. “No, it’s not been announced yet.”

Former Kerry manager Eamonn Fitzmaurice said in advance of Monday’s captaincy vote that it was time to ditch the tradition and club delegates were informed that current manager Peter Keane feels the same way.

“I think you could argue for both ways,” said Sugrue.

“I couldn’t say my opinion is strongly either way. I think it is something that can produce some little issues at times. It very much depends on the context and situation you are in. Currently I don’t have a major problem with it because we have a group who are willing to work as a group and an individual being called captain doesn’t make a whole pile of difference to us.”

As for back to back All-Star Clifford being thrown the senior armband, Sugrue has no problem with that development.

“You can argue any which way, Dave seems to be a very level-headed guy and seems to have a good grasp of where he wants to go with regard to where the team wants to go,” said Sugrue.

“Personally, I think it will rest easy enough on him.”