Stephen Rochford’s Mayo tenure gets off to a winning start 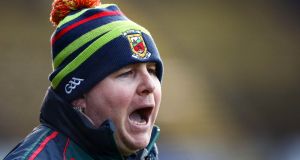 Stephen Rochford’s Mayo tenure got off to a winning start on Sunday. Photograph: Inpho

Mayo popped two late points - both frees from Kevin McLoughlin and Robbie Hennelly - to give new manager, Stephen Rochford, a winning start to his new career with his county.

It may have been a jittery start for the former Corofin manager but he was relieved to get the win under his belt given the short time he has been working with the team.

Thee former Crossmolina player said: “We’ve only had about two sessions on the pitch, so naturally we were slow at times.

“We recovered well from a poor start and that is a big positive as was the work rate of the team in general but we fell asleep when we went five points clear and really we should have closed out the game but credit to NUIG for putting in such an effort.

He added “We tried to bring to the game a few things we worked on during training but they didn’t always come off. There were a lot of individual mistakes but it is early January and you have to expect that.”

Featuring just five of the team who lost the All-Ireland semi-final to Dublin ( extended to seven when Ger Cafferkey and Keith Higgins were called in), Rochford gave five players their debuts, but it was the experience of McLoughlin who plundered a big goal which really turned the game.

The students were out of the traps early building up a three-point lead as Owen Finnerty, Criostor Davey and Michael Daly in turn hit the target from inside the opening five minutes.

Mayo minor star of 2013, Conor Loftus got Mayo off the mark with an excellent point on six minutes to settle the Connacht champions who hit five unanswered points, including two frees from McLoughlin and a fisted point from debutante Darren McHale but NIIG came back to lead at the break by 0-7 to 0-6, Gallagher and Peter Cooke with two big scores.

But this game was to ultimately turn on a piece of opportunism by McLoughlin and some careless defending by NUIG midway through the second half.

McLoughlin pounced on a stray pass and fired a rocket to the net to put Mayo firmly in the driving seat -1-8 to 0-8- and a point from Colm Boyle followed by a free from Conor Loftus pushed Mayo five clear and seemingly out of reach.

But NUIG found their way back through points from Gallagher and Cooke before Gallagher fired home from the penalty-spot and a draw looked on the cards until the students gave away two frees, McLoughlin steering over the fist a minute from time and Hennelly guiding over a long-range effort deep in injury-time to seal victory.

Both Galway manager Kevin Walsh and his Sligo counterpart Niall Carew had reason to be happy with this first outing of the season after a decent contest in the FBD League at Tuam Stadium.

Galway never trailed in an entertaining encounter but Sligo ensured it went down to the wire with midfielder Niall Murphy leading the charge with six points, five of them from play.

“It was an ideal run out for both teams,” said Carew afterwards. “The thing for us was just to blood a few young lads, it was good for them.”

Roscommon’s first competitive match of the Kevin McStay/Fergal O’Donnell era saw the home side dominate IT Sligo at Enfield.

The winners established a 1-12 to 0-3 advantage at the break, helped by Kieran Kilcline’s 17th minute goal.

IT Sligo improved in the second half, helped by Adam Traynor’s accuracy from frees. But Roscommon kept the scoreboard ticking over with fine points from Devaney, Cian Connolly, Ronan Daly and Shine.

An impressive two goals and two points by debutante and former Cavan player Nevin O’Donnell, the return of Emlyn Mulligan and Adrian Croal to the Leitrim attack and a convincing victory over GMIT gave Leitrim the perfect new year present in their opening game of the FBD League in Ballyhaunis.

Ken Early: Guardiola eyeing what could be a last chance for European glory with City 06:00
Galway’s ‘massacre of a beating’ on Tyrone a statement of intent to Dublin 06:00
Magic Wand in the running to conjure Riyadh win 06:00
Six Nations: Pitch-perfect England expose character flaws 06:00
Donegal rue missed opportunities as Dublin survive again 06:00
Crossword Get access to over 6,000 interactive crosswords