‘I’ve huge regard for what Jim McGuinness did in Donegal, but I’ve never spoken to him’ 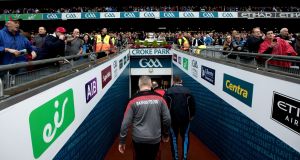 Mayo manager Stephen Rochford dismissed suggestions that there was anything deliberate or premeditated in the incident which saw numerous players collide as the Dublin and Mayo teams took the field in Croke Park on Sunday.

Speaking in Castlebar on Monday evening, Rochford confirmed that the appearance of the teams at the same time was entirely coincidental.

“Between one thing and another, somebody had something to say or something to do. You get delayed 30 seconds, a minute, but there was no ‘Dublin are coming here let’s get out, Dublin aren’t there, let’s wait for them.’ There is a lot more to be dealing with and focused on.

“Dublin bring a lot more challenges than to be looking at small points like whether they go out second or we go out first, but I know we got a direction to be second out on to the field. With us being a minute or two late I don’t know why Dublin were four or five minutes late. That is probably a question Dublin need to answer.”

Rochford said he was mystified as to the origins of the rumour that former Donegal manager Jim McGuinness had been enlisted to aid Mayo in their All-Ireland final preparations.

McGuinness had expressed his disappointment that the rumours had been broadcast as fact in his role as an analyst for Sky television on Sunday, pointing out that it was disrespectful to suggest that the Mayo management would call upon an outsider. Rochford had heard the rumours but said that it wasn’t something that bothered him as it was beyond his control.

“And I suppose why it would or wouldn’t become a concern of mine if it brought a lack of focus or became a distraction to us. It didn’t. If somebody wants to say the Pope is training us next week, so be it. It isn’t something I’m going to lose any sleep about it and it won’t distract us from what the task is on Saturday week.”

Alan Dillon is the main injury concern for Rochford as they turn their attention to Saturday week’s All-Ireland final replay. The experienced forward, who came in as a substitute, was involved in a collision shortly after scoring a point which drew Mayo level in the second half and had to leave the field shortly afterwards.

It will be the middle of next week before medics can clarify that he will be available for the replay.

“He has had an x ray and a scan; there is no injury as such to the bone, just bruising on the lacer part of the foot. Again it is not on his kicking foot, it is just a case of can he move on it next week, that is the concern.

“He had signalled to come off just before he kicked the point. Thankfully he was able to manage through for that minute or two.”

Evan Regan, who took a knock to his head in a collision with Denis Bastick just before full time, will go through concussion protocols but is expected to be available.

“Cillian O’Connor suffered an ankle twist with fifteen minutes remaining but despite some swelling on Monday, there is no question of his being unfit for the replay.

Mayo will resume training on Wednesday night. Rochford felt that the conditions contributed to the general sense that Sunday’s All-Ireland took a heavy toll of physical attrition from both sides.

“You were looking at two fit teams, challenged by the conditions. What might typically have been a pass which might sit on the grass became a 50-50 ball where maybe it had just gone away.

“You were committed to having to go into make a challenge which was previously a pass. Guys took up a couple of more bangs than what might have been the case.”