Sporting Controversies: Joe Sheridan’s ‘goal’ and the chaos that followed 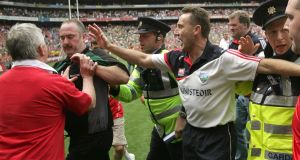 The most infamous goal ever in Gaelic football? Most likely, for it wasn’t only the manner of Joe Sheridan’s dive over the line in the final stages of the 2010 Leinster Football Final, effectively throwing the ball into the net as he slithered towards it, but the fall-out afterwards – when Tyrone referee Martin Sludden was physically assaulted on the pitch and again as he headed towards the tunnel – that added to the infamy of it all.

This was a derby match full of brim and passion, one where Louth – seeking a first provincial title since 1957 and playing in a first Leinster final since 1960 – seemed destined to put one over on neighbours Meath. That is, until the end, an ending unlike any other; and one which changed the face of the GAA forever more as post-match pitch invasions were consigned to the past. In a somewhat ironic twist, the GAA had for some time actually been making noises about keeping the playing pitch free of such invasions. The events of that July Sunday sealed the deal.

First things first, for some context: Meath were roaring hot favourites, having destroyed Dublin in the provincial semi-final in a game where five goals had thundered past Stephen Cluxton, while Louth were the unquestioned underdogs in everyone’s minds but their own. In truth, Louth – with Paddy Keenan putting in an immense display at centrefield and Ray Finnegan pulling strings in attack – should have been out of sight as the match moved into the endgame.

But they weren’t, guilty of missing some gilt-edged scoring opportunities, and Meath’s last gasp “goal” – four minutes into stoppage time – was to create unholy war of a kind that would subsequently involve court proceedings against a couple of Louth supporters who confronted the referee on the pitch.

The catalyst for such scenes, though, came with the goal itself which was as illegal as poitín from a backyard still.

For those among the 48,875 in attendance that day, Graham Reilly’s Hail Mary of a high ball in towards the Louth goal hung for an age in the air before Séamus Kenny rose highest to claim it, saw his shot superbly blocked by Keenan and the ball then squirmed away from Des Finnegan for Sheridan (a question mark also hung over his presence in the square) to find it in his hands momentarily.

Before anyone knew what was happening, Sheridan – pushed in the back – was diving towards the goal … and then dropping/throwing/losing control of the ball, before both he and the ball were over the line. It was clearly an illegal act. And the two umpires stood their ground, with no green flag raised. Meath players celebrated. Louth players urged referee Sludden to consult his umpires. The referee told one of those in a white coat to raise the green flag. Meath 1-12, Louth 1-10. Within a minute, the final whistle. Cue, mayhem!

“A pure dive,” Pat Spillane would later remark of Sheridan’s goal in his Sunday Game analysis. “It was like an American football touchdown.”

A tradition of big matches at the old Croke Park down through the years had seen spectators manage to get through or over the chicken wire that used to be a deterrent to such end-of-game invasions but was actually no deterrent at all.

In modernising the stadium, the GAA had adopted international measures – not unlike those used by Fifa – and such wiring, apart from a fence at the Hill 16 end, was discontinued with a different security approach of frontline seats covered and security guards manning pitchside gates. On this day, there was no holding back supporters, who flooded onto the pitch Meath fans to celebrate a first provincial title since 2001; Louth supporters to commiserate at the injustice of it all, and a small number with ulterior motives. Before anyone knew it, all hell had broken loose.

The unseemly scenes took everyone by surprise. “Meath have snatched this game,” began Ger Canning in his live commentary on RTÉ television, only to be stunned as the cameras focused on the referee and a red-shirted Louth supporter then racing into the picture and striking out at him. “Oh, that shouldn’t happen, that is disgraceful, that’s disgrace. A disgrace. They can argue all they want but the referee in good faith made his call … we have seen the benefit of the replay, the ball was thrown over the line, the goal should not have stood.”

Gardaí and the linesmen were required to shield Sludden from further threats as, clearly physically shaken, he was eventually ushered towards and down the tunnel to the safety of his dressing room. If he’d looked behind on his way down the tunnel, he’d have seen a steward sprawled on the ground having been hit by an object thrown from the stands.

Meanwhile, many Louth players slumped to the Croke Park turf in disbelief at the fate which had befallen them. A magnificent second-half performance had brought them to within touching distance of victory, only to be undone by the craziest of goals ever seen. As our GAA correspondent, Seán Moran, started out his match report: “Other than that, Mrs Lincoln, was the play interesting?”

The post-match press conference didn’t feature Louth manager Peter Fitzpatrick – who had shown admirable composure on the pitch following the final whistle to urge Louth supporters away from the referee – but he did make his thoughts known on LMFM radio, where he said: “It’s hard to swallow. I don’t mean this to sound like sour grapes but Meath came back and got the goal in the end. I just think it’s a disgraceful decision by the referee.

“I thought he threw the ball into the net. I asked the referee, ‘Why did you give that goal?’ He said, ‘C’mon with me to the dressing room’. He explained he was going to give a penalty. I said, ‘Why didn’t you consult your umpires?’ One of our players, Aaron Hoey, asked him to consult the umpires and he told the umpire to put his flag up. So, what is the point of having umpires?”

Louth’s goalscorer that day was JP Rooney, a longtime stalwart of the team. “I’m still waiting for someone to say we’ve been the victim of a bad joke. How could he give it?” I’m absolutely raging. What’s the point in training all year when that happens? How he could give the goal I don’t know,” he remarked of finding himself in the middle of a living nightmare.

Meath’s captain Nigel Crawford took a considered stance post-game: “I’m sure most players have been involved in controversial situations like that where you get calls for replays and things like that happening, but I just don’t think it’s possible or I just don’t think it can happen. If you start that, where do you end up? Do we go back and say the ball wasn’t on ground when we touched it and they got a free or whatever? It’s just very unfortunate that it happens in a high-profile game right at the end of a game to a team that hasn’t won in a long time. It’s just a very unfortunate situation.”

The fallout lasted beyond the day itself. There were calls for Meath to offer Louth a replay. That didn’t happen. And the GAA issued a statement the following day in which it acknowledged Sludden’s admission of making a mistake. “….the referee has stated that he made a mistake in awarding the Meath goal. However, under GAA Rules, a re-fixture cannot be ordered as the referee’s report of the full time score is final.”

The would be no replay, offered or otherwise, and it seemed the whole controversy took its toll on both teams in subsequent matches in the championship: Louth reappeared through the backdoor and were comprehensively beaten by Dublin in the qualifying series, while Meath advanced to the quarter-finals as Leinster champions only to outplayed by Kildare.