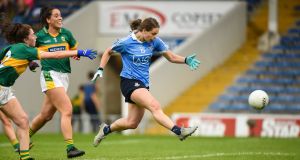 The Sky Blues will meet Cork or Mayo on September 24th at Croke Park after seeing off Kerry by 14 points at Semple Stadium in Saturday evening’s semi-final.

Aherne collected 1-9 in the quarter-final victory over Waterford and she was on form again as Mick Bohan’s Leinster champions advanced.

There was a brace of second-half goals for Noelle Healy, while Nicole Owens also raised a green flag for the winners.

She opened the scoring with a third-minute point and while Dublin had to wait until midway through the first half for their opening goal, they were regularly punching holes through the Kerry defence.

Lyndsey Davey had the ball in the Kingdom’s net in the fifth minute but referee Stephen McNulty whistled back for an earlier infringement.

Two Aherne frees had Dublin 0-3 to 0-0 clear before Kerry finally opened their account in the seventh minute, 16-year-old Hannah O’Donoghue slotting over a point.

But Kerry would have six wides registered by half-time, in contrast to a more economical Dublin outfit, who were off target just once.

Dublin’s opening goal, in the 16th minute, was clinically finished at the Killinan End by Aherne, who played a one-two with Niamh McEvoy before slotting home.

And as Dublin cruised through the first half, they had their second goal four minutes before the interval, Aherne converting a penalty after McEvoy was fouled on her way through.

Kerry were struggling badly for attacking inspiration, against a ravenous Dublin defence led brilliantly by Sinéad Finnegan, and as their forwards were forced into long-range efforts, too many failed to find the range.

Louise Ní Mhuircheartaigh did offer stout resistance – collecting 0-8 for Kerry – but Dublin were simply too good and will hope to end a run of Croke Park heartbreak next month.

Dublin have lost the last three All-Ireland finals to Cork – and Bohan was in charge back in 2003, when the Jackies were felled by Mayo.

But there’s a growing belief in the Dublin camp that this could be the year they finally land a second senior title – and first since 2010.

There’s a clinical edge to a well-drilled outfit and they led this semi-final from start to finish.

They built on that half-time advantage with three further goals in the second half and two of those were unanswered strikes after the restart.

Owens steamed past Aisling Leonard on the New Stand touchline before coolly slotting past Laura Fitzgerald less than a minute after half-time.

And that was followed by Healy’s first goal five minutes later as Dublin clicked through the gears.

Kerry had to wait 13 minutes of the second half for a point but scores were few and far between for Graham Shine’s charges, despite a big shift from Ní Mhuircheartaigh.

Dublin kept the scoreboard ticking over and Healy’s second goal – superbly finished at the Town End of Semple Stadium – was the icing on the cake in the 59th minute.

1913: The year the GAA really started to get its house in order 06:00
Ken Early: Champions League has stolen international football’s clothes 06:00
‘A radical departure’: Who are CVC and what are their aims with rugby? 06:00
The strangest fishing club in the US and the huge pike that bit a schoolboy 00:00
GAA’s return-to-play draft road map to be published in the coming days 22:00
Crossword Get access to over 6,000 interactive crosswords