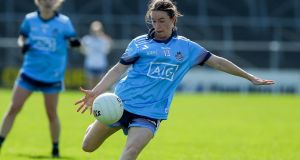 Sinéad Aherne scored 2-5 as reigning champions Dublin set up an All-Ireland SFC semi-final date with Cork in a rematch of last year’s final.

Dublin had far too much firepower for Kerry in this quarter-final at O’Connor Park in Tullamore as they ran out 15-point winners.

Sarah Houlihan’s goal reduced the arrears before half-time to give Kerry hope but they went into half-time trailing by 2-3 to 1-4 having played with the breeze.

But Aherne found the net on the resumption and again later in the half to seal the win and set up a semi-final showdown with Cork.

Kerry captain Amanda Brosnan won the toss and opted to play with the breeze in the opening half. However, it was Dublin who struck first when Aherne popped over a free in the fourth minute.

Louise Ní Mhuircheartaigh opened Kerry’s account from a free in the seventh minute but Dublin didn’t let their opponents build any momentum.

A quick free delivered into the danger-zone allowed Carla Rowe to latch on to it and score the first goal for a 1-2 to 0-1 advantage in the eighth minute.

Emma Dineen scored for Kerry and they could have had a goal when Ciara Trant denied Sarah Houlihan from point-blank range.

Kerry were still right in the game and only trailed by a goal until the quarter-mark when McEvoy pounced to fist the ball past Laura Fitzgerald from Aherne’s delivery.

That put Dublin 2-2 to 0-2 in front but Houlihan hauled Kerry back within two points with a goal and a point. The Beaufort forward scored her first point after Síofra O’Shea had gone close with a goal attempt.

Then Noelle Healy and Lyndsey Davey both had chances to extend Dublin’s lead but Fitzgerald was in inspired form in the Kerry goal.

The Kerry goal arrived in the 27th minute when Houlihan showed perseverance to power an effort past Trant.

Sinéad Goldrick scored a key point when Dublin were desperate for a score but Lorraine Scanlon rounded off the scoring and Kerry only trailed 2-3 to 1-4 at half-time.

However, Dublin made good use of the breeze in the second-half. Rowe pointed right after half-time and then substitute Caoimhe O’Connor’s pass sent Aherne through a gap to score their third goal.

McEvoy quickly scored a point to put Dublin 3-5 to 1-4 ahead and on their way to victory.

Miriam O’Keeffe came off the bench and scored 1-1 within two minutes for Kerry but Aherne showed all of her experience to calmly slot her second goal with 13 minutes remaining and there was no way back for the Kingdom.

Niamh Hetherton came off the bench to score a fifth Dublin goal and wrap up the win as they now start turning their attentions to the semi-finals.

Munster look to bear brunt of financial crisis; Bayern offer a slice of normality 07:02
Japanese fans can cheer remotely at empty stadiums 06:30
Munster braced for worst of financial crisis due to Thomond Park debt 06:35
Seán Moran: Horan’s cautious approach under growing pressure 06:32
When the action stops, sports photographers think outside the box 06:00
Crossword Get access to over 6,000 interactive crosswords