‘We had a meeting after the game and they said ‘Ciarán, we need you to get scoring’’ 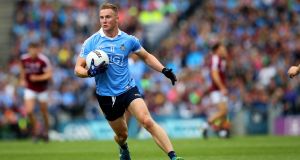 Dublin’s Ciarán Kilkenny: “You have to put in the hard yards, and that’s what we’ve done over the last number of years. Lads put their life on hold for this team and each other.” Photograph: Ryan Byrne/Inpho

It seems something changed for every Dublin footballer between the drawn and All-Ireland final replay, and for Ciarán Kilkenny it was rediscovering that eight-year-old within. All it took was a simple shift in mindset and the rest is championship history.

Back in Dublin after a long celebratory weekend in New York, Kilkenny is still acting a bit like that eight year-old, giddy and excited and brimful of youthful enthusiasm for all things football. If that replay win was his best game all year (he was RTÉ man of the match) then he’s already thinking about being better again in 2020.

“In the first game, with our inside forwards Dean Rock, Con O’Callaghan, Paul Mannion all playing really well all year, my mindset was as soon as I get the ball, give it to the best man in the best position,” he says. “The mindset was ‘get these guys on the ball’, look up for them, and move the ball forward to them.

“We had a meeting with the guys after the game, the management team and a few players. They just said ‘Ciarán, we need you to get scoring’. So my mindset completely changed for the second game. I was like ‘as soon as I get this ball I’m going to take my man on and I’m either going to get a shot away or I’m going to put him under pressure to try to create a free’.

“The way they put it was. Like, I remember Declan Darcy was just saying to me, ‘pretend that you’re a kid, that you’re an eight-year-old again. Do what’s instinctive to you. Don’t be worrying about what’s going on. Just go for it and enjoy it’. Then in the game thankfully touch wood I put in a good performance.”

It may or may not be some consolation to the Kerry players, but Kilkenny has no doubt they gave Dublin their toughest test all year.

“We just didn’t perform in the first game. Then our mindset in the second game, of the replay, was just really, really good. We did the exact same preparation as for the drawn game but you just know when the preparation has been spot on.

“Albeit the first half [of the replay] was a really, really competitive game, probably one of the best first halves I’ve ever played in, against a team in terms of how competitive it was, how end-to-end it was, 10-all at half-time, phenomenal scores from both sides.

“ In the second half the game-changer was the goal just after half time, Eoin Murchan’s goal. I thought in key moments of the game our guys showed great composure, decision-making was really good.”

It seems the pressure of the five-in-a-row took some toll the first day too.

“You never know how things are going to go, but from just talking to some of the guys I think they’re saying we have done this, this massive achievement that has never been done, and just go out and have the craic next year.”

Pressure off, in other words. Not that Kilkenny or anyone else will be letting up. Nor is there any talk of retirements.

“There hasn’t been that discussion within the player group,” says Kilkenny. “Or between players and management or anything like that whatsoever. I was on the flight home with Dean Rock and the two of us were talking about next year, and we were just talking about small, little bits and pieces where we can improve.”

So any confirmation or otherwise that players like goalkeeper Stephen Cluxton and manager Jim Gavin will still be on board for 2020 will have to wait for another day.

“That’s completely up to Stephen, but he’s an exceptional leader for us and an exceptional player. He’s just a legend, a freak of nature how good he is, how he is. If you see him with his top off he’s absolutely shredded, in incredible shape.”

What is certain is that winning the record firth All-Ireland – Kilkenny’s sixth in all by the age of 26 – felt different.

“And everywhere you go you’ve been getting such positivity, which is really, really nice to get. Because sometimes you don’t get that positivity, especially as a Dublin player sometimes, I suppose in social media and the media as well.”

Still, he heard hints of negativity about Dublin’s superior resources and population, including on RTÉ Prime Time.

“For me, at the end of the day, you still have to run, to play, to practice. If you see where we train in the off season – it’s muddy, there’s no warm showers. You have to put in the hard yards, and that’s what we’ve done over the last number of years. Lads put their life on hold for this team and each other.

“So it was a bit frustrating to see that because I thought it was a pretty special thing we did. And it was down to a lot of people that have given up their own time, club mentors and development squads, parents dropping kids to training within the group. So, yeah, it was frustrating.”

The Offload: Philip Browne’s grave outlook should be taken seriously 10:00
All in the Game: Did Rory Delap’s long throws cause the 2008 financial crash? 10:00
Cricket ban on using saliva to shine ball will only be temporary 08:41
UK government says elite athletes must be allowed to opt out of contact training 08:14
Resisting the pull of The Field, Tiger Woods proves fitness in Covid-19 charity match 07:55
Crossword Get access to over 6,000 interactive crosswords