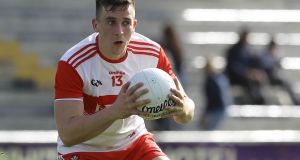 Derry kept their Division 3 promotion hopes alive after a workmanlike win over Louth at Celtic Park.

On a day where neither side shone, the winners can thank top scorer Shane McGuigan, whose contribution of 1-7 ultimately proved the difference.

Rory Gallagher’s side edged a tight first half, running in 1-6 to 1-5 up at the break.

Back-to-back Burns frees handed Louth the lead for the first time early in the second period. But despite losing Pádraig McGrogan to the sin bin, the Oakleafers hit the next four scores to lay the foundations for victory.

Louth, however, refused to wilt. Another brace of points from Burns left just a kick of the ball between the sides in injury time. But Slaughtneil’s McGuigan curled over one last point to confirm Derry’s win.