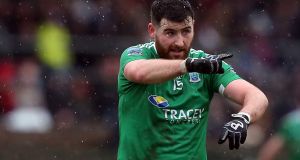 Three opportunist goals, two from the mercurial Seamie Quigley was the catalyst for this comprehensive victory for Fermanagh over a very youthful Wexford side in this Division Three affair in treacherous conditions at Brewster Park.

But the main talking point about this match was an ill- tempered second half where referee Liam Devenney handed out a flurry of cards, including four reds – with three players and one official sent off .

Fermanagh assistant manager Ryan McMenamin and Wexford’s Brian Malone were sent off after a melee involving around 16 players and mentors from both sides eight minutes from time.

Fermanagh midfielder Ryan Jones was also given a straight red card in the 49th minute and Wexford lost Tiarnan Rossiter to two yellow cards in the 55th minute five minutes after he goaled for Wexford.

Meanwhile, Quigley had two simple tap ins, the first coming in the 20th minute when a shot from Declan McCusker came off the post and Quigley reacted quickly to stroke the ball home as the Wexford defence hesitated.

The second came in the 25th minute when a long ball from Conal Jones was tapped down by captain Eoin Donnelly and Quigley once again had a simple tap in.

The home side began brightly and had a great chance of a goal when corner forward Daniel Teague opened up the Wexford defence and found Conal Jones, whose rasper cannoned off a Wexford defender and went over the bar.

But they failed to build on this start as Wexford hit back with two pointed frees from wing forward Donal Shanley.

It looked good for the home side when Conal Jones let fly on a loose ball that flew into the net in the 44th minute.

The home side seemed to panic a bit when midfielder Ryan Jones was lined in the 49th minute and Wexford made a battle of it through goals from Nick Doyle and Rossiter before the game ended on a sour note.