Seán Moran: Limerick prove that the best win out even in strange year 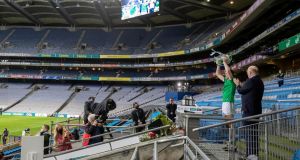 Everyone says it’s a privilege to be there and to an extent it’s true because there are so many people in the counties involved who would give almost anything to be in Croke Park.

Last Sunday in the vastness of an empty stadium, however, the media was there to record the All-Ireland final played before presumably the smallest attendance in history. In clinical and almost sterile laboratory conditions the best hurling team of this awful year emerged.

Months ago when the pandemic was fresh and the future unknowable, a senior GAA official summed up reservations about the idea of matches behind closed doors. They would be, he said, simply to find out which team was better - and was that so important?

Championship matches were supposed to be about so much more: the sense of occasion, celebrating local identity and in the happily crowded confines the creation of atmosphere so palpable that you can feel it on television.

So in another way, it’s not so much a privilege as a duty to be in attendance. We’re there to take notes on what’s happening and that focus is narrow. There’s no colour or atmosphere: just watch the tree fall in the forest and confirm for everyone it happened.

No game is quite as emotive as hurling or as responsive to the rise and fall of the crowd’s engagement. Is there any equivalent of the impact on the attendance when a defender breaks clear and hammers the ball up to the other end to the accompaniment of great relieved roars?

A Limerick v Waterford All-Ireland would have been tumultuous with spectators. Instead you can hear sideline conversations. Mayo manager James Horan realised during one match that the player he was discussing with one of his selectors could hear the exchange.

It was Offaly manager John Maughan, who said during the summer that this year’s championship would always be the “Covid All-Ireland” and that’s true but whether such designation means in the other great pandemic phrase that there’s “an asterisk” on this year’s title is more nuanced.

What better than the pure distillation of a match with no trappings or distraction – just hurling in laboratory conditions – to reveal the essential nature of the game’s most formidable team?

So, the hurling year ended with the champions most had envisaged at the start. If some of the performances had lacked emphasis by their standards, Sunday had the stamp of greatness.

The best teams are capable of responding most spectacularly on the biggest stage and on Sunday Limerick gave their best display all year and maybe – allowing for last year’s Munster final – ever and looked like a team in evolution rather than at or nearing their peak.

If the power and productivity of the wing forwards Gearóid Hegarty and Tom Morrissey were the main talking points of Sunday’s demolition job, the fact is the whole team is settled and practised.

John Kiely lined out 13 of the 15 who started the 2018 final against Galway and the two changes were both injury-enforced. His reshuffling of the deck after sustaining the long-term losses of full back and corner back Mike Casey and Richie English, the latter an All Star from three years and the former not far off it was shrewd and effective.

Dan Morrissey picked up the threads of a previous deployment on the edge of the square and grew into the role, ending the season as odds-on for an All Star whereas Barry Nash with little experience, proved effective at four.

Of course, Limerick’s full-backs rarely find themselves exposed on the blasted heath but for all that, there is individual star quality on the back line with Seán Finn a certainty for a third successive All Star in the right corner.

Waterford were a disappointment for those of us who saw an irresistible momentum in their defeat of Kilkenny but in their defence, which opposition would have done any better?

Under Liam Cahill they covered a vast amount of ground and were justifiably seen as one of the two top teams in this championship. But their fate underlined how difficult it is for a team to come from nowhere to win an All-Ireland. Even Clare in 2013 had racked up half of their four under-21 All-Irelands by the time they won senior.

Wexford in 1996 are the last convincing example of a team largely dismissed and with neither under-age tributaries nor any senior success – both of which are boxes that Waterford actually could tick - that managed to gather themselves to such effect that they ended up with the Liam MacCarthy.

Teams and managements deserve huge credit for keeping the various shows on the road – 2,000 temperature checks over 12 weeks according to Kiely, for example – as do groundsmen everywhere during a season that brought about the wettest championship in living memory.

The sight of Páirc Uí Chaoimh behind a curtain of torrential rain was one of the images of the season. It didn’t affect Limerick who watched Tipperary dissolve in November and the fate of last year’s champions underlined the supremacy of their successors.

Only Waterford in the Munster final and Galway in the All-Ireland semi-final got close. The former was revealed as illusory at the weekend whereas the other felt a bit that way.

On a sterner note, surely the black card will need to be looked at again by the GAA, as the amount of gratuitous but calculated fouling this season has made further mockery of the arguments that attracted 82 per cent support at last February’s congress in shooting down what has been proved beyond doubt a necessary measure.