Seán Moran: How league is now a springboard for the championship 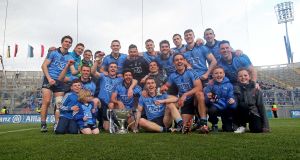 The modern football season was born 15 years ago. In 2001 the contours of the competitive landscape were changed beyond recognition. The league for the first time would be played off in the calendar year, removing the disjunction between a pre-Christmas schedule followed weeks later by the spring fixtures. Later in 2001 the All-Ireland qualifier series would debut, allowing counties a chance to put behind them defeats in the provincial championships.

Since then the influence of the league on the championship – or at least its accuracy as a reflector of status – has developed enormously. Seven of the All-Ireland winners in this period had already won the spring competition and a further two had contested the final. The corresponding figure for the previous 15 years, 186-2000, was three.

The day after the 2003 All-Ireland final, when Tyrone won a first Sam Maguire, manager Mickey Harte preached what he had practised.

“The other interesting statistic is that yesterday was our 21st match and we never played a single challenge in the entire year. I think it’s very valuable to be playing in the National League up to the concluding stages.”

Where Tyrone led, Kerry (three times), Dublin (twice) and Cork have followed. There are reasons for this evolution. A full league programme starting in February and the advent of the qualifiers meant that the football season became more complicated. Kerry, who won the 1980 All-Ireland playing just three matches, needed eight fixtures to negotiate their two ‘back-door’ All-Irelands.

It was no longer a series of isolated engagements and occasional big collisions nicely spaced out through the season. Teams have needed to find a rhythm that can sustain them.

There is another reason for the convergence of league and championship success, according to Brian McIver, who has managed two counties to league finals, winning with Donegal in 2007 and losing with Derry two seasons ago.

“The league is a big step in getting everything sorted out for championship and there isn’t that much of a gap between one and the other. The size of a county’s panel is a big factor. You have more players to try out and with a schedule that’s reasonably tight you’ve better cover for injuries and suspensions.”

So stronger teams are more likely to survive the speed bumps on what is a relatively short road trip.

You have to go back to 2008 for the last time the league wasn’t won by Dublin, Cork or Kerry. Those counties have won every All-Ireland in that period, apart from Donegal’s in 2012. Yet it hasn’t been all about winning the title in the spring; the mere fact of competing at the top level has been a far more reliable indicator of championship ranking.

Armagh were the last team to win the All-Ireland after spending the previous year outside of the league’s top flight and that was 14 seasons ago – the only time this has happened since the calendar year was introduced.

If a county is going to be a contender, they’re going to want to be in being in Division One. Mayo are the most consistent county in the league and the only one never to have been relegated in the past 15 years. They mightn’t have won an All-Ireland but only Kerry have been to more finals.

Kerry may vary the emphasis – all of Jack O’Connor’s All-Irelands went hand-in-hand with a league title, whereas Eamonn Fitzmaurice’s teams have done just enough to avoid relegation – but the county has always made sure to be in Division One.

Just four counties (Armagh 2002, Cork ’09, Down ’10 and Donegal in ’14) of the past 30 to have reached an All-Ireland final did so after spending the league outside the top division.

Dublin’s rise to prominence has seen three All-Irelands accompanied by as many league titles. Barry Cahill, who was at the end of his career in the breakthrough year of 2011 when the county won a first All-Ireland in 16 years, has no doubts about the role of the league in that resurgence.

“I don’t think it was taken as seriously in Tommy Lyons’s and Pillar Caffrey’s time; it was seen as more of an opportunity to experiment. We never got to the playoffs and that was sometimes regarded as a good thing because it meant we wouldn’t be going into the summer with a load of hype.

“That changed in 2010 when Pat Gilroy targeted the league after the heavy defeat by Kerry. We went down to Killarney and got a win there for the first time in a long time. One game that sticks in my head was the last group game, when we went to Omagh and knew if we won there was a chance we’d get into the playoffs.”

Tyrone had given Dublin some emphatic championship beatings in the previous few years and more significantly needed a result themselves to stay in Division One.

“We played really well and won. Other results didn’t go our way and we didn’t make the final but I remember at the time Tyrone weren’t happy and Mickey Harte said at around that time that it was very unlikely for a Division Two team to win an All-Ireland.

“When you beat teams like Kerry and Cork and Tyrone, it gives you that bit of confidence when you play them again in the summer.”

Sure enough, later in 2010 Dublin met Tyrone in the All-Ireland quarter-finals and beat them.

It’s consistency that matters. Donegal were a rare example of outliers winning the league. Although there wasn’t any immediate championship follow-through, McIver, who managed them, points out that half of the team that beat Mayo that day went on to play in Jim McGuinness’s All-Ireland-winning side five years later.

“Donegal’s case has to be placed in context,” he says. “They’d lost numerous finals so it wasn’t just winning the league but lifting a hoodoo that was significant. We had a big championship match shortly afterwards against Armagh, who were Ulster champions, and won a tight game.

“Tyrone were next and they had a totally different style of play to Armagh. There was also no serious rivalry between the counties at that stage. We were caught on the hop. Tyrone were clearly better on the day but we’d just surmounted two serious psychological barriers and the energy we’d used up winning the league eventually told against us. I would still think that the players gained confidence from it in the long run.”

The league also offers something to counties in the lower reaches. With divisional finals staged in Croke Park on the same weekend as the Division One climax, the league represents an attainable shot at silverware.

John Evans has operated successfully in the lower divisions, taking Tipperary from Division Four to Division Two in successive seasons and repeating the feat with Roscommon, who rose from the third to the top division in 2014 and ’15 – despite which he parted company with the county after a disappointing championship.

Down, who were promoted with Roscommon last year, suffered a similar fate and their manager Jim McCorry also stepped down.

“The obvious question that jumps out,” says Evans, “is why wouldn’t you have a good championship after doing well in the league? Well, for a start, you’re dealing with a weaker county and they have to get up the line first, which involves getting promotion.

“You’re pushing a team to improve and that involves basic things like sorting out the best venues for training, get the fitness levels right and of course winning, because there’s nothing better for getting the belief.

“But that takes a significant amount of time – two to three years – and after you’ve found your plateau, you have to target staying there. As you go up you’re demanding more of players, to be able to do more with the ball and to bring in new players if they aren’t going to go any further.”

Like McIver, Evans says that league success can come at a cost for developing teams.

“It does take a lot out of a team’s energies to get promotion but you have to sacrifice that huge amount it takes out of a team to get up the line. You’re asking players to push against their boundaries, to reach the highest expectations all the time, but the league is hugely important in the development of a team.

“It’s the experience, the fitness, the skills level, the competitiveness, but most of all it’s the winning and it does drain a team because don’t let anyone cod you when you go to Croke Park for a league final that you’re going to throw it away.

“You can’t have butter on both sides of the bread when you’re developing the team.”