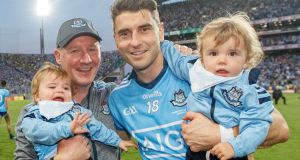 Bernard Brogan with Dublin manager Jim Gavin and Brogan’s sons Keadan and Donagh after the five-in-a-row was completed in the All-Ireland final replay against Kerry at Croke Park. Photograph: James Crombie/Inpho

Bernard Brogan’s retirement at the age of 35 probably didn’t come as a major surprise in that it had been widely speculated on since Dublin’s completion of the All-Ireland five-in-a-row in September, but it closes the final chapter on a spectacular career that inspired as well as ran in tandem with the county’s re-emergence as a force this decade.

By the end of 13 seasons in the blue jersey, he was one of the most decorated footballers in the history of the game, having amassed seven All-Ireland medals, the Footballer of the Year award, five leagues and four All Stars. He also captained Ireland in the 2015 international rules series.

In recent years, he had become more peripheral to the team after being dropped for the All-Ireland replay against Mayo in 2016 and two years later sustaining a cruciate injury, which undermined what had been looking like a determined comeback at the start of 2018.

He persevered, however, and as late as the beginning of this year’s championship he was eager to try to regain a place in the match-day panels. His only appearance came against Tyrone in the All-Ireland quarter-final round-robin but he was named on the subs’ bench for the final replay against Kerry.

In the statement tweeted out on Thursday lunchtime, he referred to the involvement of his brothers Alan and Paul in Dublin’s first All-Ireland win in 16 years, back in 2011, and how the achievement will be “something we will look back on and value even more as time goes by”.

He and Alan were both Footballer of the Year in successive seasons – the last two awards of the traditional Texaco sports scheme – with Bernard in 2010 becoming only the third player to earn the accolade without winning an All-Ireland medal and the first to do so without reaching the final.

Onto the next journey!💙 pic.twitter.com/y2yb9u7Ov6

He is among the number of Dublin players to have Kerry connections, in his case his mother, Marie Keane Stack, who is from Listowel. His father, Bernard senior, was a leading light in Kevin Heffernan’s teams of the 1970s and scorer of the one of the most famous goals in Dublin-Kerry history – the clinching score in the legendary 1977 All-Ireland semi-final.

The father was a centrefielder but Bernard junior was simply an assassin of a forward. His intercounty career, which launched in 2007 and was played out under three managers – Paul Caffrey, Pat Gilroy and Jim Gavin – bloomed relatively late but his reputation as one of the best finishers in Dublin had been established in club football with St Oliver Plunkett’s/Eoghan Ruadh.

A marker’s nightmare, his pace was unrelenting, fuelling the ability to get out to the ball and take on snap shots, which defenders struggled to contain. That speed also enabled him to get into goalscoring positions where he proved lethal. His championship tally was 21-197 out of a total of 36-344 makes him the county’s third-highest scorer behind Jimmy Keaveney and Dean Rock.

His calm on-field demeanour denoted a player who conducted himself with great discipline despite the provocations to which all top-class forwards are subjected. His exploits and affability made him an obvious role model within the GAA and, as the public reaction on social media indicates, he was immensely popular with the Hill and well-liked in other counties.

County highlights included the goal that set up a cliff-hanger in the 2010 All-Ireland semi-final against Cork, when narrow defeat by the ultimate champions was the final apprenticeship for a Dublin team that would win its first Sam Maguire a year later.

In that final Brogan’s four points – the last which equalised the contest with Kerry just after Kevin McManamon’s goal – were a critical part of the victory. Just as two years later when, with the team under the cosh for the first half against Mayo, his goal before half-time, fisted in when being challenged by Ger Cafferkey and Rob Hennelly, helped to limit the damage.

In the second half, another goal put Dublin back in control just after Andy Moran’s for Mayo had re-opened the match.

If his role in recent years had become more muted, there would have been no five-in-a-row but for the tour de force in the 2015 replayed All-Ireland semi-final with Mayo. Within 90 seconds Brogan scored and then created a goal for Philly McMahon – to turn a four-point deficit into a lead that transformed Dublin and sent them into a final where Kerry were again beaten.

In his retirement statement, he summed up a remarkable career and his commitment to the county.

“I gave my all for the cause right to the end and I am happy now to take my place in the stand, back to where it all began for me as a child with my own father – cheering on the Dubs.”