Seán Cavanagh unhappy with Tyrone County Board after fixture clash 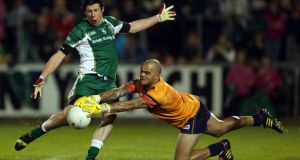 Ireland’s Seán Cavanagh has expressed his unhappiness with the Tyrone county board for allowing a relegation fixture involving his club Moy to be fixed for the same day as Saturday’s first Test in the International Rules series. Cavanagh, one of the country’s most capped players with 11 appearances, said that the series means a great deal to him, as the winners’ trophy is named after his late friend Cormac McAnallen.

“I was really disappointed with Tyrone county board,” he said. “They put a relegation fixture against our biggest rivals on today at four o’clock. It was against Eglish (coincidentally, McAnallen’s club) and I have been fighting all week, and Croke Park have been trying to fight all week to get the game moved.

“I think phone calls were being put in all week and whatnot and I was trying to put it across to Tyrone county board that this competition means a lot to me personally in that it is Cormac’s Cup.

Passionate
“I have been quite passionate about that down through the years and even up to last night I wasn’t sure whether I was going to get to play. I thought I was going to have to go down the road and play a club game today.

“Croke Park . . . have been putting in phone calls to Eglish, putting in phone calls to Tyrone county board all week. The fixture has been announced for a week and a half and they were trying to convince Tyrone and convince Eglish to move the game back 24 hours; there was talk they were going to move it back to earlier in the day so I could maybe play a part in the Moy game and then come down here.”

The match was ultimately called off, but only due to the weather.

Asked about Australia coach Michael O’Loughlin’s description of his team’s effort as “unacceptable” Cavanagh said that acclimatising to the game takes time.

“They sat off us a wee bit. I think the game takes a wee bit of a while to settle into things and once they got their sharpness it was a different game and they were a different animal. We have reason to be disappointed too. We could have been 20 or 30 up at half-time and we can certainly improve on that and hopefully Cormac’s cup can stay here.”

O’Loughlin expanded on his unhappiness with the team’s performance.

“I think for our guys, I was disappointed in our efforts, our ability to apply pressure was non-existent in that first half. For a team that prides itself on pressure, to chase and tackle, that was disappointing and that is the harsh reality of it. Our guys got a real big wake-up call. Some guys got found out. Some guys individually were really holding the team together and that’s okay. We live to fight another day and we go to Croke Park with an understanding of what is required.

“Class act that the Irish team are, they were able to use the ball and some outstanding play from them as a team. I really think they held the ground, tackling pressure, breaking tackles, so it’s something we need to address.”

Happy
His Ireland counterpart Paul Earley was correspondingly happy with his night’s work.

“I thought we controlled three of the four quarters and obviously the Australians came strong in the third quarter and in their game momentum is a huge thing. I watch a lot of AFL games and when they get two or three goals, they can go on to six or seven on the trot so I was really pleased with the way our boys responded and finished the game strongly.”

Dublin’s Paul Flynn had an impressive debut but agreed that he had expected more of the opposition.

“Big time. I think the extra game will help them improve ten-fold. Also, in Croke Park the firmer ground will help them. Their players are fast and agile. That ground out there probably slowed them down a little bit. They weren’t able to side-step as much. They will be quick next week.”

Finally there was good news for vice-captain Aidan Walsh who sustained a knee injury late in the match and was stretchered off for what turned out to be precautionary reasons.

“It just needs rest and ice, there is just a bit of a lump below my knee. I should be alright for next Saturday night, it should be a great occasion under the lights there and they are occasions you want to be involved in, but a bit of rest over the next couple of days and it should be fine.”