Ulster side lose out at the death for second straight week 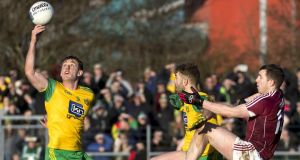 Seán Armstrong arrowed over a last-gasp point to give Galway a dramatic win over Donegal in Letterkenny.

The game was on a knife edge, with just a minute to go, when the experienced Armstrong, on the field only a matter of moments, found a way to arch over the match-winner from 35 metres to make it two from two for the Tribesmen.

A first-half goal by Eamonn Brannigan helped keep Galway at arm’s length, but the Patrick McBrearty-led Donegal took the lead for the first time in the 42nd minute.

McBrearty’s ninth point of the day briefly had Donegal in front, but Galway had enough about them and Armstrong conjured up the winner to give the Tribesmen their second win of the campaign.

“Being a point down against Donegal heading into the home stretch is a tough place to be, but it’s a great experience because you have to dig it out,” said Galway manager Kevin Walsh.

“We had to be a bit more clinical and we were at the end up.

“We could have left the fingernails a bit longer if we had taken a few chances earlier in the game. I feel that we left a few scores behind us, but the work rate the lads put in compensated for not taking as many chances.”

Corner back Declan Kyne teed up the Galway goal, biding his time before playing in Brannigan and he kept his composure to slot past Peter Boyle.

Shane Walsh, magnificent throughout for Galway, kicked three first-half points to put Galway 1-7 to 0-8 in front at the break.

Paul Brennan and Stephen McBrearty had narrowed the deficit before half-time and Donegal hit four of the first five points of the second half to get their noses in front.

McBrearty, in a rich vein of form, shone with some moments of magic, but an equally on song Walsh swung the pendulum in Galway’s favour with a brace.

Ciarán McGinley’s fist and the outside of Ryan McHugh’s left boot helped bring Donegal level in the closing stages.

A week after being pipped at the post by Kerry, Donegal were undone at the end again as Armstrong popped over just as the clock was turning red.

“I’ve said it and I keep repeating myself but the league is about learning for a lot of these players,” Donegal manager Declan Bonner said.

1 Garry Ringrose to stay with Leinster as he signs two-year central contract
2 ‘For 25 minutes I ran out of oxygen’: Pepe Reina on his coronavirus battle
3 Australian rugby staring into abyss as another crisis hits
4 Dr Claire Molloy: ‘It is a privileged place to be, on the frontline’
5 Playoffs set to be moved again as Uefa prioritise European club competitions
Real news has value SUBSCRIBE

Wimbledon will not be held this year due to coronavirus crisis 16:51
Playoffs set to be moved again as Uefa prioritise European club competitions 15:59
Harrington would prefer 12 picks over delayed Ryder Cup 09:06
Australian rugby staring into abyss as another crisis hits 09:03
Ringrose set for new central deal; memories of Björn Borg at Wimbledon 06:51
Crossword Get access to over 6,000 interactive crosswords