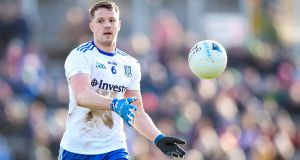 Ryan Wylie turned 26 the day the lockdown came in. He had nothing special planned so nothing special went by the wayside. But even then, even as the great hunkering down was beginning, he couldn’t have known what the coming months had in store.

The Monaghan captain is a radiographer in the Mater Hospital in Dublin and, like the rest of his colleagues, is just about able to breathe out now. The past three months have been the most hectic, strange and intense time of their working lives. They’ve had to reimagine everything, down to the most basic aspects of the job.

In the past, for instance, Wylie mostly stayed in one place and the patients were brought to him for X-ray. The need to isolate Covid-19 cases and not have infected patients moving around the hospital has flipped that dynamic on its head. Now the mountain goes to Muhammad, meaning the mountain has to come correct, every single time.

“We’re doing a lot more portable chest X-rays now, going to the patients to prevent the spread of infection. I work a lot in CT – a lot of them are getting clots in the lungs and stuff so the scans can help confirm the presence of coronavirus. So you’re moving around the hospital a lot and that involves a lot of gowning up and PPE and all the rest of it. It’s nearly more time consuming than anything.

“There’s a lot more to it now. The patient numbers probably wouldn’t show that it’s been busier but the time-consuming element to it all makes it feel a lot busier. There was a day there about two or three weeks ago that you were working away and it felt never-ending.

“Thankfully, since that, it has eased down a bit. It seems like there’s more normal patients – that’s the wrong phrase but you know what I mean. There seems to be more non-Covid patients trickling back into the hospital in recent weeks. That’s a good sign.”

To get through, they had to change just about everything. They split into teams working opposite shifts so that they would only come into contact with the same people on a daily basis. They alternated between a week of nights and a week of days. The night shifts went 15 hours, from five in the evening until eight in the morning. All the while trying to stay a step ahead of the virus.

“Hectic,” he says. “Part of it as well has been colleagues getting it and having to take two weeks at home. So its been a big team effort, getting shifts covered and all that. Some people were off with it and were feeling worse about missing work than about actually being sick. But there was nothing they could do. You couldn’t let them into the hospital, no matter how mild their symptoms were.

“The days, the nights, your whole body clock. The work is grand, it’s just getting your body into some sort of regime. You find yourself twisting and turning at three in the morning after a week of nights and then you’re up at seven to start your week of days. The worst of it has been trying to manage that. Getting out to exercise has been the best thing that happened.

“I have a newfound respect for people who go out and do their 5k every day. I don’t know how they do it. It isn’t for me, I know that. You make yourself do it and you do feel better after it. But give me team training any day. I’d much rather get hit by one of the lads and listen to the shite afterwards than have to be out running the roads the whole time. The craic with the lads, the car journeys up the road and all that – that’s what I’m missing the most.”

This weekend would, all going to plan, have meant an Ulster semi-final. In the three months since he’s seen the rest of his Monaghan team-mates, the most he’s been able to do is head down to Fairview Park near where he lives and kick a ball around. This is the time of the year when football usually becomes the mould around which the rest of his life is shaped. Events have put it back in its place. No bad thing, he reckons.

“You really see now how much of a hobby football actually is because of how much you’re missing it. Before all this happened, it felt like everyone was giving out about it, giving out about the amount of training and how much time you had to put into it. And now all you hear is how mad everyone is to get back to it. It has really brought home how much it’s all part of our daily lives.

“We did a thing with Monaghan there where we were ringing elderly ones who were cocooning. And it’s really only when you get chatting to them and hearing them talk about how much football really does mean to people. When you’re playing, you’re just thinking about yourself and about getting out of work for training and beating the traffic up the road and getting ready for matches.

Radiographers, nurses, cleaners – everyone seems to be more friendly with each other or more interested in each other

“You genuinely don’t realise how much it means to supporters to be going to games and going along on a journey with you, winning and losing together and all that. It was good to get chatting to ones about that kind of thing, about old games they went to and what it meant to them through the years. I’d never have got to do that if the season had just gone ahead as normal.”

For now, his team is in Dublin, in the hulking great lump of a hospital a few hundred yards away from Croke Park. In normal times, the Mater is a small town onto itself, with thousands of people moving in and around it on a daily basis. For the past three months, it has been a place of almost complete silence. It might have been the strangest feeling of all, in fact.

“Even though it’s the busiest time any of us has experienced, the hospital seems quieter than ever. There’s no visitors. The coffee shops are closed basically. Starbucks gives out free coffee in the morning but it’s closed after that and there’s a Café Sol on the ground floor and they’re only letting a certain amount of people in at certain times. It used to be you’d go down on your break and the place would be heaving.

"But apart from that, it nearly feels like it’s brought the staff of the hospital closer together. Radiographers, nurses, cleaners – everyone seems to be more friendly with each other or more interested in each other or something. People are stopping to ask how each other are doing a lot more, being more supportive of each other. You never really know how people are. That’s definitely something good that has come out of it.”