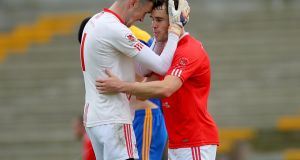 St Brigid’s and Pádraig Pearses will meet in a Roscommon senior football final for the first time since 2016 after they overcame Boyle and Clann na nGael respectively in Sunday’s semi-finals at Dr Hyde Park.

Lorcan Daly struck the decisive score for the defending champions in the fourth minute of injury time as his winner secured a narrow 1-11 to 1-10 triumph in a pulsating contest against their South Roscommon neighbours.

The sides were tied at 0-6 apiece at the break but Emmett Kelly’s 33rd minute goal looked to be a crucial score. But Donie Shine was sprung from the bench for Clann na nGael and his 1-2 contribution in a devastating five-minute spell appeared to have won the game for the 2018 champions.

Pearses refused to buckle, however, and when Ronan Daly and Seán Ryan, from a mark, restored parity, the younger of the Daly brothers duly delivered the knockout blow deep into stoppage time.

Goals from Ruaidhrí Fallon and Ben O’Carroll catapulted St Brigid’s back into their first final since 2018 as they outclassed Boyle in the first of Sunday’s semi-finals on a scoreline of 2-15 to 2-9.

Benny O’Brien’s side were never in danger of losing, despite Boyle grabbing two goals in the final quarter from Colin Goldrick and Enda Smith.

Boyle found themselves 1-7 to 0-5 behind at the break and when Cian McKeon kicked a couple of early points at the start of the new half, a revival was in the pipeline.

But points from Pearse Frost and Sugrue stemmed the tide before the sides exchanged rapid fire goal through Goldrick and O’Carroll.