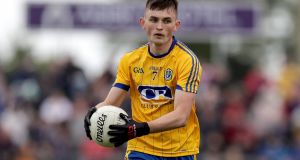 Brian Stack was in top form for Roscommon as they saw off Clare. Photo: Laszlo Geczo/Inpho

The Bannermen only scored four points, with three of them coming in injury time, while Roscommon were never rocked from their comfort zone.

Both teams had a player sent off – Niall Daly for two yellow cards in the 23rd minute, while Clare midfielder Ciarán Russell was shown a straight red card for lashing out at Roscommon defender Mark Richardson in injury time.

Wind-assisted Roscommon got the scoreboard moving with their first two attacks. Richard Hughes and David Murray set up the excellent Brian Stack for the opening score before Cathal Cregg used the wind expertly to guide his effort between the posts from 40 metres.

A foul on Hubert Darcy handed Cian McKeon the chance to open his account from a free in the 10th minute, and he duly obliged.

Roscommon goalkeeper Colm Lavin did brilliantly to intercept a pass from Ciarán Russell that was destined for the unmarked Keelan Sexton in the 15th minute – a major turning point in the match.

In general, Clare manager Colm Collins would have been happy with the way his team were frustrating the Roscommon forwards, denying them the space to build up a substantial lead that the help from Storm Ciara suggested they needed.

Ciarán Lennon, McKeon (a free) and Cregg did manage to find the range for the Rossies but a 0-6 to 0-0 half-time didn’t seem to be enough.

However, Roscommon’s game management and composure were excellent in the second half. Eddie Nolan, introduced at the break, helped Smith gain a foothold around the middle, and suddenly Roscommon were lording the possession stakes.

A foul on Lennon resulted in McKeon’s third free of the afternoon after 39 minutes. David Tubridy finally opened Clare’s account from a long-range free, but they still struggled to gain any foothold in the contest.

Their remaining three points came in second-half injury time through Tubridy and Eoin Cleary from frees, and a fisted effort from substitute Jack Morrissey.

Enda Smith pointed on the run with three minutes remaining before Gately bundled the ball into the empty net, after Lennon had been denied, to get Roscommon’s league prospects back on track.