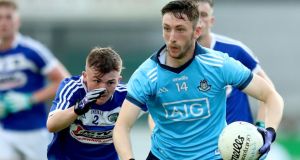 Tom Gray can’t recall exactly when he first saw Ciarán Archer play Gaelic football, partly because he didn’t instantly stand out. Now, there’s simply no avoiding him – Archer scoring 9-30 in the four games it has taken Dublin to reach this afternoon’s All-Ireland Under-20 football final.

Their opponents Cork probably won’t be able to avoid him either, although for Gray, in his second season as Dublin under-20 manager, said there is a danger in hyping up any one player. Especially at age 18, Archer still young enough for the under-20s again next year.

“Look, he’s obviously shot the lights out in terms of scoring this year, in the development league as well as the championship,” says Gray, the Na Fianna clubman who has been coaching most of the current under-20 panel since under-16. “He’s only 18, has a fantastic interest in getting better as a footballer, very curious, very ambitious and very determined. But he’s a young man, and he’s been lucky enough in that up until this year there’s been no hype.

“So it’s something we’d been keen to protect as far as possible, to enable him develop as a footballer in his own time. Look, he’s a very rounded individual, very mature in terms of trying to get better as a footballer. Nevertheless, it would be unwise to think a huge hype about any footballer wouldn’t affect any young man of 18, 19. I think he’s best placed of anybody to deal with it, but by the same token it’s not something me as his manager should be encouraging.”

From the St Maurs club in Rush, north county Dublin, Archer might well have been lost to soccer, getting a trial contract with Yeovil Town, before deciding to return home. Fresh out of his Leaving Cert year, Archer’s scoring rate – 3-8 (against Longford), 1-8 (against Wexford), 3-8 (against Laois), and 2-6 (against Galway) – will no doubt have caught the attention of Dublin senior manager Jim Gavin, although Gray is quick to play down that hype too.

“It’s a bloody difficult thing to get into the Dublin senior forward line. Conor McHugh was the under-21 player of the year in 2014, Aaron Byrne, both club mates of mine (Na Fianna), he was under-21 player of the year in 2017, and neither of them are playing for Dublin this weekend. I think Conor is in the extended squad, and Aaron just hasn’t made it yet, and he’s now 23.

“Ciarán came into the squad at minor level, under-17. So he would have started in the earlier rounds of the Leinster championship two years ago, then his form dipped a little bit. He used to come on as a sub, that year, and was actually on the under-20 squad last year, the extended squad. So I’ve known him for three years.

“He was with us during his Leaving Cert, and that’s a measure of his dedication or madness, I’m not sure which. And he’s been shooting the lights off for St Maurs, so it’s no surprise that’s he’s playing well, but he’d be the first to acknowledge that the ball still has to get up that end of the pitch, that the other players are giving him the ball for it.”

Still Cork will hold little fear: their Munster final win over a Kerry under-20 team loaded with All-Ireland minor winners is evidence of that, as is their turnaround against Tyrone in last week’s semi-final, seven points down at the start of the second half, Jack Murphy and Mark Cronin showing them the way.

Although they haven’t won an under-20 All-Ireland (previously under-21) since 2009, Cork also boast more titles than any other county with 11; Dublin last won in 2017, the year before it dropped to under-20, and have only ever won five.