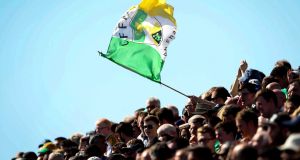 The death has occurred at the age of 69 of Offaly All-Ireland winner Paddy Fenning. He had battled motor neurone disease for the past year. From the Tullamore club, he played in the county’s first All-Ireland victory in 1971 and the following year in the successful defence of the title.

An 11-year career in the Offaly attack concluded in 1980 with the high-scoring defeat by Mick O’Dwyer’s Kerry in that year’s All-Ireland semi-final.

In 1971 when the county won its first Sam Maguire he came on off the bench in against Galway but in the back-to-back year he was an ever-present and in the drawn final against Kerry, he scored 0-2 followed by 1-1 in the replay.

That goal was vital even though Offaly ran away by the end to win by nine. In these pages, Paddy Downey recorded:

“The major turning point of the game came exactly eight and a half minutes after the restart and it settled the destination of the Sam Maguire Cup for 1972. A shortish Kerry kick-out was collected by Paddy Fenning from a tangle of players about 50 yards out and something to the left of the Kerry posts.

“His high kick should have been covered by the Kerry defence all the way,” Downey continued, describing how the ball elude the full backs and bounced into the net.

“It was the lucky break that many people had said would be needed to swing the game the other way. That goal swung the battle decisively in Offaly’s direction and it crowned a fine performance by Fenning . . .”

The player himself later joked about Séamus Darby’s most famous goal, which beat Kerry in 1982.

“I tell him,” he said in an interview with Vincent Hogan in the Irish Independent last January: “’’Sure anyone can score from 13 yards out, I got one from 50 in ’72 against the breeze!’”

His career included four Leinster championships, a Railway Cup in 1974 and the honour of captaining Offaly in 1978.

After his football career had ended, Paddy Fenning played a significant role in the community, fundraising to clear a development debt for his club as well as for Tullamore hospital. In 1993 he published a book, ‘Offaly – The Faithful County, A Pictorial History of the Football Years’.

In recognition of all his contributions to the community, he was named Offaly Person of the Year in 2011.

He passed away peacefully at home on Friday, survived by his wife and best friend Kathryn, children Amy and Barry and extended family. Those who would have liked to attend can view the Requiem Mass on Monday, May 18th, at 10am on www.tullamoreparish.ie.

He reacted to his diagnosis by planning to raise funds for MND. A sponsored walk had been arranged for this June but had to be postponed because of the Covid-19 pandemic. The target is €150,000 – to be divided equally between research into motor neuron disease, support services for those affected and local homeless projects, to be administered by the St Vincent de Paul.

Those who would like to contribute can do so at www.gofundme.com/f/MNDwalk.