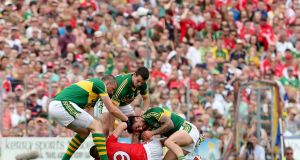 Former Cork defender Noel O’Leary has discussed his long-running rivalry with Kerry’s Paul Galvin, revealing it was enmity at first sight but maintaining it never descended into personal insults.

Few footballers loved to hate each other throughout the 2000s like powerful half-back O’Leary and hard running Kerry half-forward Galvin who were consistently paired off in All-Ireland and Munster finals.

They were both dismissed for trading blows in a 2009 Munster championship tie and O’Leary acknowledged that it did get “hot and heavy” on a number of occasions.

The 2010 All-Ireland winner told ex-Kerry star Tomás Ó Sé in an interview for Benetti Menswear that he was also happy to have the opportunity to clarify that they never trash-talked or sledged each other, as some believed.

“One thing, while we’re on it, and it’s something I always wanted to put out there. Over the years I’ve heard an awful lot of things, false things really, this kind of sledging that goes on, I’ve heard numerous things from people that he said certain things to me during the games, personal things,” said O’Leary.

“I can categorically state, for both of us to be fair, it goes both ways, that he never opened his mouth to me and I was the same to him. I think it’s only fair that that’s put out there.

“But no, look, I know we had our tussles or whatever but I’d have huge respect for him as a footballer. Certainly a lot of what went on was blown out of proportion a small bit.”

Current Wexford manager Galvin made his name as a hard-running wing forward with the Kingdom throughout the 2000s, though first came to O’Leary’s attention while playing for UCC and there was an immediate tension.

“He actually wasn’t on the Kerry panel at the time. We played UCC in a practice game and he was actually playing wing-back that time, Galvin. Jaysus, I can always remember, we didn’t tussle but . . . I don’t know what it was about him, I just felt that he wanted to, how would I say it . . . you could feel the tension during the game, I don’t know what it was. I said in my own mind anyway, ‘I have no doubt that if we meet down the road there’ll be some tango between the two of us’. And sure lo and behold that’s the way it panned out.”

As a nod to the softening of their relationship post-retirement, O’Leary joked that the pair could get into the fashion business together.

“I was half thinking of bringing out my own underpants range and I was thinking of getting him on board to collaborate with me,” smiled O’Leary. “I have the name and all made up. Who are that designer crowd, D&G? Well it’s L&G, Leary and Galvin. That’s the brand name.”

O’Leary is optimistic about the current Cork team who appear to be on the up again after a difficult few seasons.

“The big thing I see with them in the last year or two, there’s certainly a big culture shift there,” he said.

“I would say over the last five or six years, the culture was all wrong. It kind of starts from there really, you have to have a team that are buying into everything. I felt they were getting that a bit wrong at the time. Ronan [McCarthy] has definitely moved things on a bit. In relation to the calibre of players over the last few years, maybe Cork were caught a bit that way as well.”

1 Sebastian Vettel: This Formula One season could be my last
2 Limerick’s Shane Dowling forced to retire at 27
3 In turmoil on and off the pitch: Where did it all go wrong for Barcelona?
4 FAI board gives green light to League of Ireland restart plan
5 Sheffield United back on European track as they sink sorry Spurs
Real news has value SUBSCRIBE

Sheffield United back on European track as they sink sorry Spurs 20:23
FAI board gives green light to League of Ireland restart plan 20:13
Lewis Hamilton: F1 title win would mean more due to Black Lives Matter 20:02
Sebastian Vettel: This Formula One season could be my last 19:17
French Open set to allow 60% of capacity crowds in September 17:55
Crossword Get access to over 6,000 interactive crosswords