O’Hare gets Down over the line against Derry 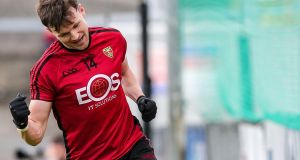 A relentless performance from Donal O’Hare showed the value of free taking as Down secured a two-point Division Three win over Derry at Páirc Esler.

The game was not one for the ages and with both sides in search of a first win, they strained under the pressure throughout. But O’Hare was calmness personified as he coolly slotted over each of his six points in a pressure cooker of a game between the Ulster rivals.

The Mournemen had to come from behind to claim the spoils and O’Hare was integral to keeping Down in the contest having been outplayed for the majority of the game. Derry had deservedly led 0-8 to 0-7 at half-time with Shane McGuigan to the fore.

Paddy Tally’s team only led the game for the first time in the 66th minute from an advanced Barry O’Hagan mark. And that was enough to propel them over the line with O’Hare aptly drawing the scoring to a close.