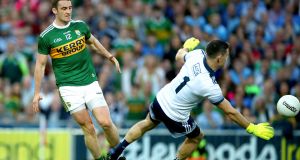 “I definitely should have scored,” says Stephen O’Brien as he recalls his crucial goal chance in the All-Ireland final replay against Dublin.

It doesn’t necessarily haunt or destroy him; all O’Brien will say is that he should have scored it. It was one of the defining moments from the replay last September.

“It would have levelled the game, with about 10 or 15 minutes to go, and I definitely should have scored,” O’Brien says nonchalantly, revisiting that goal chance on 54 minutes, to be exact, which could have drawn Kerry level with the champions. Instead his effort was batted away by Stephen Cluxton and Dublin stayed ahead, 1-13 to 0-13.

Then in the next breath, Paul Mannion kicked his fourth point of the evening and the game began ebbing away from Kerry. Dublin won 1-18 to 0-15 and the rest is championship history.

Only for O’Brien, on the top of his game for both the draw and the replay, Cluxton’s save had as much to do with Dublin’s defensive experience as his own offensive instincts. He can recall it in detail (though slightly confusing Mick Fitzsimons for Jonny Cooper).

“I got the ball, beat one or two players, then I remember it was a very similar chance to the goal we scored against Mayo [in the Super-8s], where I passed to Paul Geaney on the back post. But I remember looking across to him, and Mick Fitzsimons I think was on the line [it was actually Cooper], he did a very good job. I was coming from a tight angle, and I was hoping he’d come to me, and I’d just pop it over his head.

“If he had come to me, it wasn’t what I expected he’d do, but wanted him to do. So I suppose he did what I didn’t want him to do, which is a sign of good defending.

“But I think it’s something we work on as well, where the goalkeeper says if you’re coming at a tight angle, stay at the back post. Because that’s a certain goal. So I just didn’t think the pass was on, the loopy pass to Paul, on the back post. Possibly a bit of a drilled pass, I know Jonny Cooper [in fact it was Fitzsimons] was coming back, I saw him as well. So Paul wouldn’t have had time to catch it.

“At the same time I was still very close to goal, tried to put it over Cluxton’s right hand shoulder, and I just didn’t catch it, went straight at him, and poor finish really. I should have kept it low, if I could go back again. It’s definitely a regret, yeah.

“But looking back on it I still don’t think the loop pass, which was originally the one I was trying to play, was on. I think maybe if I played a bullet-pass to Paul he might have been able to palm it. I still don’t think he would have had time to catch it. But it’s split second, especially after riding a challenge or two.”

As defining scores go, however, Eoin Murchin’s converted goal chance for Dublin from the throw-in for the second half will always stand apart. O’Brien doesn’t dispute that, and also credits Dublin’s experience in the taking of it.

“I’d say so yeah, we don’t run too many set plays like that. So maybe that’s something that kind of develops over time wth a team like that and they have an excellent coaching staff. At the same time, David Moran went up to contest it, he could have caught the ball and their set play would have been taken out of it.

“Set plays are fine if they come off, they’re brilliant if they do but it can be hard. We’ve worked on things in the past that have just never came through in the game for us. So I suppose we’re maybe a bit more off the cuff, or we like to think we are anyway.”

Speaking at the launch of the 2020 Allianz Football League – the 28th year of the company’s sponsorship with the GAA – O’Brien also gets the chance to revisit Dublin in the first round, under the lights at Croke Park on January 26th. With both teams just back from holiday trips (Kerry were in Thailand, Dublin were in Bali) it may not exactly mark an All-Ireland rematch. The 2019 final has come and gone.

“Looking back it was huge opportunity for us, it was just disappointing we weren’t experienced enough, or hadn’t been around the block long enough to see the game out. But credit to them, they came back strong and they really pressed us up high and we will try to learn from that and if we get into that situation again we will hopefully finish the job.

“I suppose there were a couple of crucial turnovers towards the end of the drawn game where we were a point up, especially when Killian [Spillane] got the goal, we got such a lift from that it’s a pity we weren’t able to tag on a few more scores after that. Look it was a great opportunity but it doesn’t mean we didn’t have a chance the second day, we proved we could live with them the first day so we had the same chance the second day. We had our chances that day, me especially.

“So we were close that day too. But you have to credit Dublin, they played well both days and probably corrected a few things they thought went wrong the first day and showed the sign of true champions.”

O’Brien turns 29 next month, his debut season in 2014 being Kerry’s last All-Ireland win, and although still rooted in Kenmare (where his mother Mary runs the popular bed and breakfast at Hawthorn House), his engineering work with a pharmaceutical company now sees him based in Cork.

“I’m probably in the prime of my career, and want to maximise every year too. Overall it was a positive year, we won more games than we lost, a lot of lads put their hands up, but ultimately we lost two national finals. There is pressure to win with Kerry, and it’s a long time since we last won the All-Ireland.