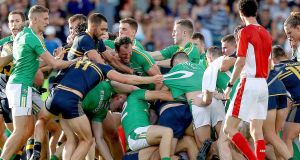 November’s International Rules series has been called off - the last one was held in Australia in 2017 . Photograph: Tommy Dickson/Inpho

This year’s planned resumption of the international rules series in November will now not go ahead. The news was expected given that both the GAA and AFL seasons are currently in lockdown with significant revenue losses in both hemispheres.

Privately, Croke Park sources had been saying since the suspension of activities that the scheduled Tests were almost certain not to take place and after discussions on Friday night between the organisations, it was agreed to postpone the series.

Croke Park Head of Games Administration Feargal McGill said that the outcome had been fairly inevitable.

“It was an obvious enough decision. Both of us have more important and urgent things on our minds but when everything settles down, we’ll return to the international series and consider where we go next. It’s likely that 2021 would be the first possibility for consideration but it’s all down the road a bit at the moment.”

On Sunday morning, Irish time, the AFL posted official confirmation on its website.

“The AFL and the Gaelic Athletic Association have agreed to postpone the series, which was due to return in November for the first time since 2017, because of the global coronavirus pandemic,” it read.

An AFL spokesperson added: “At an appropriate time, we will work with the GAA on potentially resuming the series in coming years.”

The news means that by the earliest possible resumption in 2021 it will have been four years since the series took place, an unprecedented gap since the modern resumption of the Tests in 1998.

It will add to concerns for the long-term health of the project, which has struggled to recover from the decisions a decade ago to shift it from an annual basis to the status of a moveable feast.

Scheduling and financial worries have fed into the decision to call it off this year and the two-Test series in Adelaide and Perth in 2017 is the last time it was staged.

Australia were due this November to play Tests in Páirc Uí Chaoimh and Croke Park. The latter fixture would have been part of a double bill. Also featuring a football match would be a challenge between Dublin and Tipperary to honour the centenary of Bloody Sunday.

According to Feargal McGill, this commemoration will still be going ahead and the GAA would consider whether or not to stage a second fixture in place of the postponed Test match in the months to come.

“When Ireland play Australia later in the evening it will, in many ways, complete the circle of how far the GAA has come - from that attack in 1920 to having Games that are the envy of the world, with amateur players capable of taking on professional sports stars, and do it in a Croke Park setting that from those dark days has become one of the world’s most iconic sporting cathedrals.

“There are times when the GAA is at its best rallying around each other during hard times. This November is one of those times when we gather to remember the 14 who went to a match and never came home.”