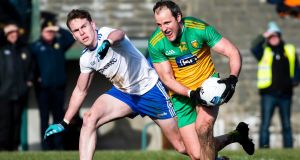 By the end of this one Michael Murphy seems ready to burst from the screen and straight out onto the field. Club or county, back door or knock-out, crowds or no crowds, football can’t begin again fast enough.

It is six weeks on since our last Zoom call, and back then Murphy was sitting at home in Letterkenny like the rest of the country: in total lockdown. He admitted to being “a wee bit down-hearted” about the prospect of no football whatsoever this year, still holding on as best he could to hope and reason.

Now Murphy has both in rhyme – a club campaign with Glenswilly beginning on July 31st, before Donegal head into the championship on October 17th. That’s not entirely unconditional, however, Murphy stating his preference to finish the season within the calendar year and also accepting there may be some players still not yet comfortable with a return to play in the aftermath of Covid-19.

“This one is different, definitely,” he says. “And it’s highly likely, yeah, it could happen. I’ve seen people who are comfortable with it from day one, and people who have reservations. And sometimes if somebody doesn’t want to go training, or wants to take a break, you may try ring him up, and say ‘listen, great opportunity here, give it a go for a few weeks’.

“I honestly feel if a player in the squad put his hand up at this stage, and felt they weren’t comfortable with it, with the severity of this one, I think the person would be respected. It hasn’t happened as of yet, and maybe something will change my mind on that nearer the time, but as I sit here today, if some or one of the players in our group was to say they’re not comfortable, I think the decision will definitely be respected.”

Murphy turns 31 in August, having made his senior debut as a teenager back in 2007, and truth is he can probably count on one hand the number of seasons left in his career. Any sort of championship in 2020 is better than nothing, although even if missing his first summer of football since he was a toddler, Murphy still wants to enjoy his Christmas.

“My own personal preference is straight knock-out, finish it within the calendar year. If that means playing the end of the 2020 league, prior to the start of the 2021 league, then we do so. But dragging it on past Christmas, to allow for qualifiers, is not ideal. But look, if you told me now I was playing an All-Ireland final the first week in January, I’d take your arm off.”

The other concern is a possible spill over of club into county preparations, and also the idea that for now at least, full contact training for clubs can only start on July 20th.

“Will it be tricky, and difficult? Definitely you’d imagine it’s going to be messy, however I still think it’s achievable. I think within the guided timeframe we can manage a club championships, and a county championship, but there will have to be some give and take on both sides.

“But that’s the one fear I would have, is there going to be a window of opportunity to prepare for the back end of the club, and into the championship season? There’s no perfect solution, but I again I think the straight knock-out is the best compromise, and maybe create a bit of excitement, something new, something different.”

Either way it looks like the 2021 season will be hectic, especially if it’s decided to complete the 2020 league: “We were sitting mid-ish table, so I have no huge preference. To me, at the moment, it’s the club, then the county. Trying to fit in the league as well might not be possible. It might be dangerous to leave no conclusions, no outcomes, so that’s something that does need to be looked at.

“I haven’t looked that far ahead. But it’s definitely something we have to think of. When will the 2021 season commence again? Some people will want a large break, others will want to keep it going.

“Even with the break now, I haven’t really switched off for more than a day or two, being honest. Mentally I felt I was always looking for that next date, and still pushing to try and find out. Again I think we need to compromise. It is a worry, but we’ll just have to navigate. The number one objective is to get football up and running. I just want to play, and I believe us as a country wants to watch it.

– Michael Murphy was speaking ahead of the final two episodes of AIB’s GAA series ‘The Toughest Trade’ on Virgin Media this summer.

French Open set to allow 60% of capacity crowds in September 17:55
Tactical test awaits Dettori and English King from stall one at Epsom 16:09
Six to go forward for Aidan O’Brien in Saturday’s Epsom Derby 15:15
‘Several’ players have withdrawn from snooker World Championship 13:48
Limerick’s Shane Dowling forced to retire at 27 12:43
Crossword Get access to over 6,000 interactive crosswords