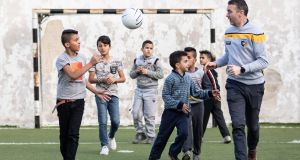 An All-Ireland winner and a reformed gambler who counsels others now, it takes a lot to blow Oisín McConville’s mind.

Yet the Armagh great was literally speechless during his recent trip to Gaza with Trocaire when he listened to the story of an Israeli soldier with a history of random rocket attacks.

“One f***ing thing I can’t get out of my head was he described, when they were in Gaza, they fired rockets and he was indiscriminate, they were just firing rockets into the place,” said McConville. “It just became like a video game, he just became immune to it, he was just firing at will and all that sort of thing. He’s now telling a story, he’s grown a conscience.”

The 44-year-old McConville realises that back in south Armagh, as bad as the Troubles were for him growing up, things never got to that level.

The five-day trip with with the charity agency brought old memories flooding back all the same. He was 11, he says, before he realised that “bombs and shootings and killings, the windows being blown in, all that sort of stuff” wasn’t actually the norm. Later, he developed a gambling addiction and puts it down partly to the trauma of being brought up in conflict.

The prospect now, as small as it may be, of a hard border potentially returning close to where he lives in Crossmaglen, bringing it with it the potential for a return to violence, fills him with dread.

He has a life there, a young family, extended family and a GAA club he adores but if Brexit negotiations take a turn for the worse and physical border infrastructure returns, he’ll leave the place for good.

McConville said he identified with the intimidation, oppression and harassment of locals in Gaza.

“I suppose it might be unfair to make a direct comparison to what was going on in Cross but there’s loads of similarities,” he said, recalling one episode in particular.

“I remember we used to train in Lurgan with Armagh, I think it was my second year. Everyone was collected at Cross at half six and we would have been in Lurgan at half seven. We left Cross one day and we were stopped six times on the way [by soldiers] because they knew what the route was.

“That was six times when they took the bags out of the car, they threw on the ground what was in them and they didn’t put the stuff back in the car. We arrived at a quarter to 10, we had a cup of tea and we went home again. Do you know what I mean? That was the sort of [situation].”

McConville arrived home from his trip last Saturday morning. He said he’s still “in the zone” of being utterly thankful for what he has, and the peace around him. He also can’t shake the memory of the eight-year-old boy he met who told him of his day routine of school until 11.30am, work with his father on a fishing boat and a side job of selling sandwiches to fishermen.

“My wee lad is seven and I wouldn’t let him cross the road on his own,” shrugged McConville.

** Oisín McConville travelled to the occupied Palestinian territories with Trócaire to highlight their Christmas Appeal, which will help to support families who are living in conflict zones around the world. Donate at: www.trocaire.org/christmas-appeal