Pundits left with little to bemoan after Croke Park spectacle 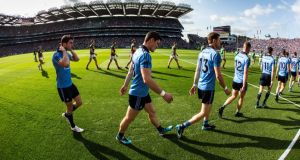 Kerry, you’d imagine, were watching back home, filing their nails while enjoying the spectacle of their potential September 20 suitors wearing themselves out for the second time in six days. Kilkenny and Galway, meanwhile, were kind of like ‘yoo-hoo, we’re playing this weekend too’, Michael Lyster also trying to remind anyone who’d forgotten that the hurling final was on Sunday. “But there’s hardly any need to tell you,” he said, which might not have been completely true, the bulk of the chat all week so focussed on the sequel of the Dublin v Mayo ding-dong that the ash-clashing skirmish was nigh on an afterthought.

“What are you hoping for?,” Rachel Wyse asked Senan Connell over on Sky Sports. “I’m hoping there’ll be an outbreak of football,” said he, much of that chat, after all, having centred on off-the-ball naughtiness in game one, rather than the on-the-ball stuff.

Did your phone ding at an unearthly hour with a newsie notification about Diarmuid Connolly being cleared to play? It did? And did you tap it repeatedly on the bedside table just to check if there was a fault? You did? Gas.

Joe Brolly put his legal cap on and told us that if the incident in question had happened on the street and been captured on CCTV “the prosecution service wouldn’t prosecute”, a clear-as-day case of self defence, he reckoned. If you ever smack someone on a night out in Belfast, you know who to hire.

“Is Diarmuid back in?,” Claire McNamara asked Dublin manager Jim Gavin. He was. Although after the week that was in it, it’d have been a hoot if he was ruled out by a tweaked hamstring.

(Incidentally, the game was on Sky Sports 1, not Sky Sports 26, or wherever they first put GAA: victory.)

...Peter Canavan, yet to be given a chair by his employers since being hired, was busy pressing buttons on his big telly, Brian Carney purring at his every tactical revelation. But he wasn’t convinced that game one would have led Mayo to see the error of their ways - “It’s not what you learn, it’s what you can fix” - and opted for Dublin.

And then the game started and Mayo proceeded to lamp interminable high balls up to Aidan O’Shea which Dublin guzzled and cleared so they might have learnt lots without actually being able to apply a fix.

But, a zinger of a first half, the pace of it gobsmacking. And Joe and Pat Spillane looked miserable come half-time, they had nothing to complain about. “We’re like the pacifist at the bullfight secretly enjoying the gore,” Joe had said to Pat pre-match (a bond finally developing between the pair over their appreciation of pukey football).

The second half. “It’s the match that keeps on giving,” as Darragh Maloney put it. In spades.

Mayo. Goal. All over?

Well ... remember Joe going on at half-time about that unguarded acre of space in the vicinity of the Mayo goal?

Three goals later and the Dubs were home and hosed.

“There are no masters of disaster like Mayo,” he said, “even by Mayo standards this was spectacular ineptitude.”

And then Michael reminded us of the day’s competition, “we would like to send you off to Thailand”, and from Cong to Belmullet they nominated Joe.

Pat noted the county’s fruitless efforts to bring Sam home the past few years by using much the same personnel and reckoned it was like “re-arranging the deck chairs of the titanic”. This all seemed harsh on Mayo, but not half as harsh as Colm O’Rourke calling them Sissy Foots.

Which he didn’t actually, but those of us not well up on Greek Gods thought he did.

“He was ordained by the Greek Gods to roll the boulder up the hill, only for it to continually fall back.”

And a rolling stone, so to speak, gathers no Sams.