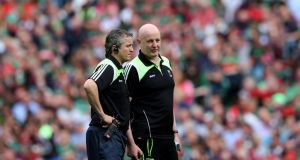 The vote of no confidence in Noel Connelly and Pat Holmes had been coming a while. At the All-Ireland final 10 days ago, there was word that a players’ letter was being delivered that night to the county board – it appears now that they held off a week as Connelly was out of the country. One way or another, this outcome has felt inevitable for much of the season.

For now, the players look to be in a holding pattern. None of those contacted on Tuesday would be drawn on the situation but the longer the week goes without a response from Holmes and Connelly, the less likely it is that the players will stay silent. The next step is management’s – do they dig in or do they accept that they have no credibility with this group?

From the start, Holmes and Connelly got off on the wrong foot. A major factor in presenting their credentials for the job was the under-21 All-Ireland they won with a large chunk of the team back in 2006. But though the players had evolved since then, both individually and as a group, they came to the conclusion early on that not a lot had changed in terms of Holmes and Connelly’s approach.

Though the players had been to two All-Ireland finals and won four-in-a-row in Connacht, they felt talked down to from the beginning. There was an acceptance from the players that they needed to improve tactically and move on a level after James Horan’s time in charge, but they soon felt that they were learning nothing new.

Small things changed and grated with the players, becoming symptomatic of a wider slippage as time went by. There was a clearout of a few of the medical staff, some of whom had seen the players through long and painstaking recoveries from injury. Logistics weren’t quite as well organised as before – a trip to Derry involved a bus delay that could have been avoided led to inevitable comparisons with the previous regime. Faces from outside the group would occasionally appear in the inner sanctum of the dressing room.

While none of this is debilitating necessarily, there was a death-by-a-thousand-cuts feel to the year. For the players, the Mayo football team was a high performance environment. That’s who the hell they thought they were. What they wanted from management was a step up from what they had before.

Instead, the vibe they got from Holmes and Connelly was that they were no different to the Mayo teams that had come close to winning All-Irelands in the past. To the players, this was all very well – if tough love was the way to go, so be it. But for that to work, it had to be accompanied by fresh ideas and a creative tactical approach. They found this to be lacking.

In short, the players needed to be impressed and Holmes and Connelly did not impress them. While it may not sit particularly well with GAA traditionalists, the reality of the situation is that when a group of players in any sport are close to achieving their ultimate goal, they feel a deep ownership of the whole enterprise.

Keith Higgins is 30. Aidan O’Shea is 25. With the exception of the O’Connor brothers, the rest of Mayo’s main men are aged somewhere in between. If there is an All-Ireland in this group, it needs to come in the next two or three seasons or they will end up as just another group of Mayo footballers who let the chance pass them by.

Whether they are right or wrong in their judgement on the abilities of Holmes and Connelly doesn’t actually matter. What matters is that they felt they weren’t being adequately led. That being the case, they owed it to themselves to do what they could to change their circumstances