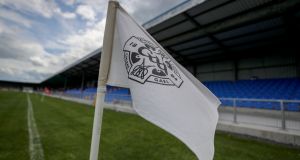 Longford had too much for Leitrim at Pearse Park. Photograph: Bryan Keane/Inpho

A strong second half from Longford saw them retain their unbeaten start to Division Three and inflict a second defeat on their neighbours Leitrim at a wet and windy Glennon Brothers Pearse Park.

Leading by two points at the interval Longford drove on in the second half with Michael Quinn, Kevin Diffley, Darren Gallagher and Oran Kenny leading the charge. Leitrim finished the game with 14 men after full back Fergal McTague was sent off for a second yellow card.

The first half was littered with mistakes from both sides, with the terrible weather conditions playing their part.

Although Leitrim started well their dominance didn’t show on the scoreboard as the sides were level three times in the opening quarter. Longford did well to weather the storm and went two ahead in the 17th minute when Michael Quinn scored after Liam Connerton’s shot had been saved by Diarmuid McKiernan.

A great Rian Brady point put three between the sides one minute later. In the 34th minute Leitrim were back in the game; Paddy Collum saved Dean McGovern’s effort but the loose ball was finished to the net by Darragh Rooney.

Darren Gallagher hit over a free to leave two between the sides at the break: 1-7 to 1-5.

Connerton and Donal Wrynn traded points in the opening stages of the second half before Longford extended their lead to five points in the 55th minute with Oran Kenny hitting over two excellent points.

Leitrim defender Paddy Maguire prevented a second goal for Longford in the 57th minute when he cleared Connerton’s effort off the line. Paddy Collum pointed over the resulting 45.

Terry Hyland’s side were hit by the sending off as Longford used their numerical advantage well, with Diffley firing over a fine point and Rian Brady sealing the win with Longford’s second goal after a pass from Dessie Reynolds.