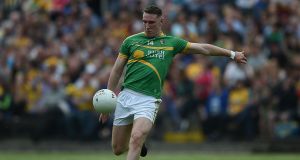 A Ryan O’Rourke-inspired Leitrim comfortably took the spoils from a must-win relegation tussle with Louth in Dundalk.

In just his second start of the campaign the Fenagh man plundered 2-3 from play, as Leitrim all but condemned pointless Louth to relegation.

The home side struggled to contain O’Rourke all afternoon and the centre forward left Bevan Duffy for dead in the 13th minute to fire to the roof of the net.

Leitrim twice led by four points in the opening half, but the half-time score did not reflect their dominance as they adjourned two in front, 1-5 to 0-6.

Louth momentarily cut the deficit to the minimum with another Burns free after the break, but Leitrim responded superbly, plundering 2-3 without reply.

Keith Beirne expertly dispatched a penalty for their second goal and when O’Rourke tapped home his second of the day from close range there was 10 between the sides, 3-8 to 0-7.