Lee Keegan: ‘We might have to concentrate on getting a championship in 2021’ 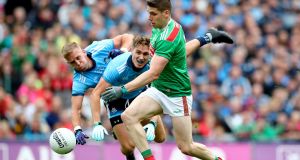 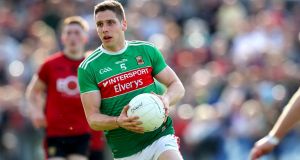 Lee Keegan: ‘In the grand scheme of things, I have nothing to give out about. When you have no target, it’s hard to build up the motivation.’ Photograph: Ryan Byrne/Inpho

Crazy times. Look around and you’ll see things you never thought possible. Never imagined could happen. When Lee Keegan and his wife went into Westport recently to do the big shop for the week, they were able to park on Main Street. All it took was a pandemic.

“I don’t know if I ever got a space before,” he jokes. “It’s like a ghost town. You’re lucky if you see three people in total walking down the street. That’s going to be so hard for people. A lot the small businesses are cafes and coffee shops and pubs and this is the time that they’d be really kicking into gear for the summer. The Easter holidays, the good weather, all that stuff would usually have the town buzzing. But it’s dead, like everywhere. It’s non-existent. When you’re able to get parking on the street in Westport, that’s when you know it’s bad.”

Life has flipped, turned upside down. In a parallel universe, Keegan would be just over a fortnight out from a Connacht quarter-final against Leitrim. We talked before the Government ban on massed gatherings but like everyone in the game, he didn’t need that sort of official decree to be dubious over where the rest of the season was going.

“Who knows whether we’ll see a championship this year at all? It seems unlikely maybe. But again, does it matter? As long as we’re able to talk about next year’s championship. Would you rather be around to be able play next year or do you want this to go on and go on?

“Maybe we’re even at a point where we might have to concentrate on getting a championship in 2021. I was chatting to a guy in New York the other night and he’s never seen anything like it. When you’re in a scenario like that, something nobody could have imagined, it’s hard to even think about when normality will come back.

“In the grand scheme of things, I have nothing to give out about. When you have no target, it’s hard to build up the motivation. We don’t know if there’s going to be anything to train for. But anytime you even really hear yourself starting to give out about it, you catch yourself. There’s so many more important things going on in the world.”

Keegan’s day job is still on the go – and more vital than ever. He’s a validation engineer in Steris, the gamma irradiation facility in Westport where pharmaceutical and medical products are sterilised.

“Some of those would be PPE equipment so obviously that’s all gone to the front of the queue. We would have quite a lot of customers who would be critical suppliers who are essential. With everything going on with the equipment shortages, we want to help obviously in any way we can.

“What we’re doing from a company point of view is that if a company comes looking for masks or gloves or that kind of thing, they go straight on the critical list for schedule. We process them straight away and get them out as quickly as possible. They go ahead of all our other orders. Meanwhile, a good lot of our other orders have gone down because they’d be for less essential things like dressings and so on.”

Meanwhile, he’s like every other GAA player in the country. Ready and waiting to be ready and waiting if and when the whistle is blown. In all truth, he’s sanguine enough about it all. Mostly, he’s glad he’s not the one that has to make the call.

“It can’t be as easy for the GAA just say, ‘We’ll target such-and-such a date’ or whenever. It doesn’t matter what date they pick, the amount of precautions that will have to be taken is huge. There’s so much to think about before you even throw the ball in. Drinking bottles, jerseys, handshakes even. That’s without even thinking about crowds. There’s so much more to this than football and normality. I don’t think it’s going to be possible to say a date and aim at it. So much is unknown.

“There’s so much sadness to deal with as well, remember. With the amount of people dying and numbers still rising, you can’t just be off-hand and go, ‘Well they had underlying conditions.’ They’re all people, they all have families, there’s grieving to do in every case. That goes through the community and I don’t know if it can be just as simple as saying, ‘Right lads, everybody go and play two club games there and we’ll start the championship in three weeks.’ I’m not sure everybody would feel right about that.

“My family are okay and that’s the only thing that’s motivating me. Whether we’re training for a game or a date off in the future is irrelevant. At the moment, every GAA player is having the same thoughts I’d say. We don’t know when we’ll be getting back so it’s hard to really knuckle down and do anything specific. But we’re lucky in that we can be active. Other people don’t get that option. We’re very privileged.”