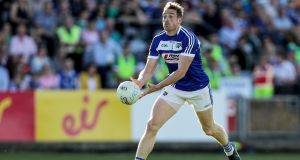 Trailing by six points entering injury time, Mike Quirke side’s revival was ignited by a wonder goal from Evan O’Carroll. Kieran Lillis then completed what seemed like mission impossible, by somehow gathering possession from a last gasp Ross Munnelly free and squeezing the ball into the corner of the net, beyond Roscommon goalkeeper Colm Lavin.

Laois played the better football during the opening half, taking advantage of the new rules to procure “advance marks” for Colm Murphy, Lillis and O’Carroll. But it was the hosts that grabbed the decisive score when Brian Stack fed Niall Kilroy for the game’s opening goal after 34 minutes.

The visitors trailed by 1-7 to 0-9 at half time but Lillis soon brought them level. Roscommon shook themselves with points from Cian McKeon (free), Niall Daly and Donie Smith (free).

Ross Munnelly’s 61st minute free restored parity once more before Roscommon appeared to grab the contest’s match-defining score. Kilroy was hauled down by Mark Timmon for a penalty, a foul that resulted in a black card for the Laois full back.

Enda Smith duly converted, and when the same player and Hubert Darcy (a free) tagged on points, Roscommon looked to have disappeared over the horizon.

But Laois hadn’t given up the ghost, and a moment of magic from man of the match O’Carroll gave them renewed hope when he sent an unstoppable shot to the roof of the net from 25 metres in the 70th minute.

Noel Gately and O’Carroll exchanged points before Lillis stunned the hosts at the death.