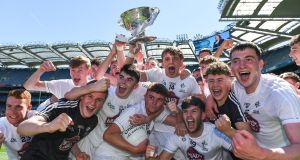 Brian McLoughlin lived up to his captain’s billing with a thrilling display to help Kildare capture back to back Leinster minor titles.

Powerful full-forward McLoughlin weighed in with three points and a lion-heart performance as the Lilies eased to a third provincial title in four seasons.

They led by five points at half-time and pushed on in the third quarter to open up a nine-point advantage while Jack Robinson added their goal late on.

Kildare’s reward is an All-Ireland quarter-final clash with Mayo though Laois will have an opportunity to redeem themselves when they meet Galway.

The bigger picture is that Kildare have emerged as the dominant force at minor level, contesting the last four Leinster finals, and manager Brendan Hackett is targeting an All-Ireland final place at least now.

“Of course there’s an ambition there to do that,” said Hackett. “Last year, we got to an All-Ireland semi-final so we have to be thinking that way. Kildare have never won an All-Ireland which is a shame but, look, for starters it would be just nice to get to the final and to be back at Croke Park again for that.”

Laois manager Mark Rooney admitted that his side suffered a bout of stage fright as they trailed the favourites from gun to tape.

Kildare were just two ahead approaching half-time but finished strong with points from top scorer Jimmy Hyland, McLoughlin and sub Cian Costigan to lead 0-9 to 0-4 at the interval.

Laois restarted with points from the impressive Diarmuid Whelan and Alan Kinsella but six Kildare points in a row including four from free-taker Hyland opened up that nine-point gap.

Laois refused to throw in the towel and outscored Kildare by 0-4 to 0-1 midway through the half but Robinson’s superb 55th minute solo goal settled the affair.

New FAI president wants to bring Brian Kerr back into the fold 06:00
Scotland aiming to go the full Hogg as they look to move on from Japan 06:00
Dessie Farrell may have the best job in football but success is not a given 06:00
New League, new rules, and a whole new level of mathematics 06:00
Cahill pleased with Waterford’s character as they claim Rebels’ scalp 06:00
Crossword Get access to over 6,000 interactive crosswords