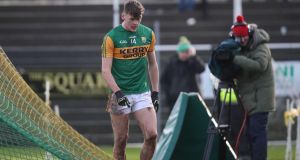 Kerry’s David Clifford after he was sent off against Tyrone. Photograph: Bryan Keane/Inpho

There is a certain breed of Kerryman who can politely divert controversy by answering a question with a question, and Peter Keane is chief among them.

Perhaps after Tyrone and Kerry were both quickly mobilised out of Omagh and over to Edendork in search of a playable venue for their Allianz Football League game the Kerry manager had already witnessed enough of a storm for one day, but either way Keane wasn’t about to blame Kerry’s one-point defeat on the fact they lost forward and captain David Clifford for the last 12 minutes of the game (including injury time).

Already booked late in the first half, Clifford saw his second yellow card on 66 minutes, this time after being grabbed in a headlock by Tyrone replacement Ben McDonnell. Clifford immediately raised his arms to protest his innocence, but referee Fergal Kelly somehow felt compelled to book them both, which he did.

“Is that your read of it?” asked Keane afterwards. “That would be my read of it too. It’s easy pickings [for the referee] to say there are two fellas involved, ‘I’ll give them two yellows’, but because he’d picked one up in the first half, two yellows make a red.”

Conditions were perfect for cross-country running but not Gaelic football, definitely not the crossfire hurricane, and while they were the same for both teams the venue wasn’t. Few Kerry players would have heard of Edendork before Sunday morning, while most of Tyrone knew the place intimately, none more than forward Darren McCurry, who learned his club trade there and as it happened produced a man-of-the-match display with 0-6 in all, as Tyrone came away 0-14 to 0-13 winners.

“We can smile now, but smiles only last a day in this competition,” said Tyrone manager Mickey Harte. “We weren’t smiling in Monaghan last week, and every point had to be fought for, as you could see out there. That won’t keep us in division one either, but the fact they went and followed through on what they asked of themselves this week, that’s always comforting to know.”

Part of that comfort also coming in the fact that Cathal McShane made his first appearance of 2020 having made his mind up not to go Down Under.

Keane took some comfort too in the fact the game went ahead. “Look credit to the club here for getting the venue ready, the conditions the same for both teams. It would have been a bummer to come back from here and come up again next Sunday. But I did think we might squeeze something out of it, even a draw.”

Squeeze still being the perfectly apt word for Division One once again this season, Mayo coming away from Páirc Tailteann in Navan with just a one-point win (1-9 to 2-5) over Meath, and the same in Letterkenny, where Galway emerged 2-8 to 2-7 winners over Donegal. And then there was Dublin’s near miraculous comeback to draw with Monaghan in Croke Park on Saturday night.

That’s four games, and a combined winning margin of three points, and as Storm Ciara passed over the other side of Ulster, Galway produced a suitably storming come back from the brink to overturn a seven-point deficit for a valuable away win.

Padraic Joyce’s men were 2-5 to 0-4 behind early in the second half, Ciaran Thompson completed Donegal’s second goal on 42 minutes, only for Galway defenders Johnny Heaney and Séan Kelly to show the way in response. Thompson and Michael Murphy both missing frees in added time which might well have squeezed than game even more.

“It was a massive recovery, but the boys showed great character and great heart,” said Joyce.