Michael Murphy also on target in entertaining victory over Roslea 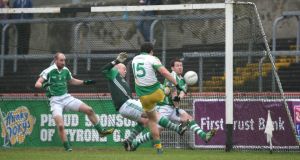 Glenswilly 3-9 Roslea 2-8: Glenswilly, a tiny club founded just 31 years ago in the heart of Donegal, are on the verge of creating a momentous piece of history, after qualifying for the Ulster Club Championship final.

Michael Murphy’s warriors saw off stubborn Roslea at Healy Park, with the Donegal captain hitting one of the goals and setting up another.

The other two were netted by Colin Kelly, vital strikes which set up a meeting with Derry giants Ballinderry in the final on Sunday week.

Glenswilly struck for a goal after two minutes, Kelly availing of ample space to unleashing a shot that was parried by goalkeeper Sean Boyle, who couldn’t prevent the ball from creeping over the line.

Murphy, Darren McGinley and Ciarán Bonner slotted over points, as they eased into a 1-4 to 0-2 lead.

And in the 20th minute, Glenswilly struck for a second goal as Kelly turned provider, crossing to the far post for Murphy to fire home.

Quigley had to drift deep to power over a long range effort, his side’s first sore in almost 20 minutes, but they narrowed the gap to five through wing back James McMahon.

Glenswilly led by 2-5 to 0-5 at the break, but Roslea d narrowed the gap through Kevin Cosgrove and Peter Lynch.

Three goals in the space of four minutes threw the contest wide open. First Kelly flicked home his second from Murphy’s floated free kick to open up an eight-point gap, but Quigley slotted home a penalty after Niall Cosgrove was brought down.

And the Erne men closed to two points when full back Conor Mulligan’s long ball was misjudged by goalkeeper Philip O’Donnell and went straight to the net. Glenswilly regrouped and Joe Gibbons, Kelly and Gary McFadden hit points to seal their win.

Rugby players taking the opportunity to focus on the long game 01:00
TV View: A Bayern win the only familiar part of lockdown Der Klassiker 21:34
Kimmich floats Bayern past Dortmund and seven points clear at the top 20:47
Saudi Arabia-funded takeover of Newcastle United in serious doubt 19:30
Miami Dolphins owner: 2020 NFL season will ‘definitely’ happen 18:37
Crossword Get access to over 6,000 interactive crosswords