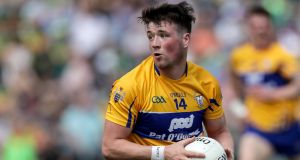 Clare claimed the narrowest of victories over Kildare in Sunday’s Division 2 clash at Cusack Park, Ennis.

Following a single point loss to Westmeath in Mullingar a week earlier, Colm Collins’ charges were under pressure to record a win, and they did so in impressive fashion.

Trailing a tight contest until the 51st minute, the Banner County took advantage of Kildare’s ill-discipline on the day. Referee Barry Judge issued eight yellow cards to the Lilywhites, and wing forward Paul Cribbin received a black card also. He spent a costly 10 minutes either side of half-time in the sin bin.

Another of their half forwards - Paddy Brophy - saw red in the 58th for a second bookable offence, reducing his side to 14 again but this time for the remainder of the contest.

The teams were level at six points apiece at the break, although Kildare had raced into a 0-5 to 0-2 lead by the 15th minute. But Clare then upped their act and drew level with scores by David Tubridy, team-captain Eoin Cleary and Keelan Sexton.

After the break Kildare went 0-8 to 0-6 ahead with a pair of pointed frees from midfielder Kevin Feely. The Banner’s Gearoid O’Brien levelled matters in the 48th minute before Cleary put them ahead three minutes later. The final quarter was a tense affair played in poor conditions.

They were level again with seven remaining. The impressive Sexton kicked Clare in front from the left sideline and he put two between them minutes later with another fine score.

The visitors did manage to find one more score before the end, with an injury-time pointed free by Feely, but they couldn’t muster an equaliser.