John Heslin strikes at the death to see Westmeath past Clare 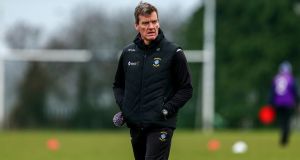 Jack Cooney’s team got off to a winning start against Clare. Photo: Tom O’Hanlon/Inpho

A converted free by John Heslin in the fifth minute of injury-time secured a vital brace of National Football League Division 2 points for Westmeath against Clare in Mullingar on Sunday afternoon.

Jack Cooney’s charges lost by a point to the same opposition at the same venue in the third round of the championship qualifiers last summer and this was sweet revenge for that setback, as Colm Collins’ troops were beaten by the narrowest of margins in a game which both managers would have targeted as ‘must win’ ahead of a difficult campaign.

An opportunist goal by Gavin Cooney, after Dermot Coughlan’s initial attempt had been blocked, put the visitors 1-1 to 0-1 ahead in the sixth minute. Ten minutes later, Anthony McGivney’s well-taken goal levelled the contest at 1-2 apiece. Coughlan was sin-binned in the dying moments of the first half and Westmeath led by 1-5 to 1-3 at the interval.

A great goal by roving corner back Jack Smith put the home team five points to the good (2-7 to 1-5) in the 49th minute, but Clare – with David Tubridy always prominent – patiently clawed their way back into contention.

Approaching the end of normal time, Westmeath led by two points but a defensive mix-up gifted Keelan Sexton a point to halve the deficit. Before play resumed, the referee issued straight red cards to Killian Daly (Westmeath) and Alan Sweeney (Clare) for an off the ball incident.

The Banner County men drew level in the third minute of added-time courtesy of a fine point by Coughlan, and a draw looked very likely until sub Tommy McDaniel was fouled after producing a great catch, and Heslin stepped up to win the day for Westmeath by slotting over a tricky free.