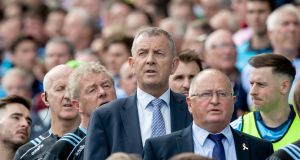 John Costello, the Dublin GAA chief executive, has questioned the “standards” and “editorial choice” adopted by RTÉ’s Prime Time show in the immediate aftermath of the capital football team clinching a historic five-in-a-row of All-Ireland titles.

In Costello’s wide ranging annual missive he addresses Prime Time’s suggestion that due to Dublin’s “abundant resources of population and sponsorship there will never again be real equality in the game.”

The RTÉ programme, which aired last September, followed this up with a report noting continued ill feeling around the country about Dublin’s “financial advantage” and how it may have “paved the road” for recent success.

In response, Costello has said he was “shocked” that Prime Time would decide this was an issue worth covering.

“Dublin football teams have ‘raised the passions’ of supporters, commentators and viewers for a long time,” Costello wrote. “Though the issue of funding for games development in Dublin was discussed in detail on the Sunday Game during the summer, I was somewhat shocked when, with the dust not even settled on our historic All-Ireland football success, RTÉ’s flagship investigative programme Prime Time included the debate as an ‘issue’ worth covering.

“Without moderation, what happens on social media where attention and populist outrage are craved is largely beyond our control and unworthy in many instances of rational debate. However, one would – and should – expect different and higher standards to apply to our national broadcaster and to a programme of the calibre of Prime Time. Perhaps not. By any reasonable and objective assessment, it was a strange editorial choice so quick after the historic five in-a-row victory.

“Most of those approached by the programme to discuss the issue – many of whom were still celebrating the five-in-a-row success – were unhappy with Prime Time contriving to make a cause célebre of Dublin’s success.

“Let’s be clear when perhaps their editorial team were not so clear,” he continued. “Prime Time essentially used how the GAA funds a team of Games Promotion Officers to encourage, coach and support young children to play Gaelic games through their primary schools and GAA club nurseries, in the most densely populated region in the country to raise questions with regard to the achievements of our senior football team.

“As they say you’re entitled to your own opinion but not your own facts.”

The Irish Times offered Prime Time a right of reply to Costello’s comments, and they said: “In the immediate aftermath of Dublin’s historic win in September RTÉ Prime Time debated a question that has been the subject of discussion all over the country for some years now - whether or not there was a danger that Dublin GAA was becoming too dominant.

“Dublin’s victory in September led to further comment on this issue and so it was the most appropriate time to have this fair and balanced discussion, which repeatedly emphasised the scale of the sporting achievement of the Dublin team.

“Since the broadcast nobody has pointed to any specific fact included in the item that was in any way inaccurate.”

Costello continued to support the three year Super 8 trial period but as it enters it’s final season he did question the potential moving of Dublin games from Croke Park.

“From our perspective, hosting a Dublin senior football championship match in Parnell Park will lock out thousands of supporters from both counties. Is this the best way of promoting our games?”

With less than enthusiastic comments about the return of the International Rules – “A welcome sporting diversion, some of you might agree, as winter sets in,” – he expressed fears about the influence of Australia’s national sport on Gaelic football, with pointed criticism of the ‘advanced mark.’

“At issue is what it will mean for the direction of Gaelic football. Is this another step closer to International Rules on home turf? Moreover, given the healthy 2019 signals that more teams were re-embracing a genuine attacking philosophy, suggesting the blanket defence era is on the wane, is there really any requirement for such a fundamental rule shift?”

He even quotes Tomás Ó Sé – who calls the mark an “absolute disaster” – and Jack McCaffrey who labelled it as “awful” and a step towards “stop start” football.

Costello does, however, believe men’s football needs to copy the female version by using a “hooter clock” that is only ticking when the ball is in play, while encouraging the introduction of a second referee for intercounty hurling now that the sliotar is moving at “super sonic” speed.

There was also a glowing tribute to the outgoing football management team led by Jim Gavin.

“His teams play in a brilliant fashion that is true to the best aspects of Gaelic football. Jim occasionally referenced the heroes past who wore the blue jersey. His respect for those who have gone before was very genuine and he felt it was the job of the incumbent to ‘pass the jersey on’ having done his utmost to improve it.”