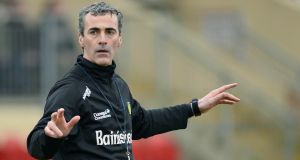 Jim McGuinness says his Donegal players bought into his methods fully once they realised the success they could achieve. Photograph: Russell Pritchard/Inpho/Presseye

Jim McGuinness has insisted that exhaustion or burnout was never an issue for his Donegal players and has criticised the media for painting a picture of him “whipping the boys” in training while in charge.

The 2012 All-Ireland winning boss admitted he did push his players harder “than I could have imagined” when in charge between late 2010 and 2014 and revealed they once had a 16-week pre-season.

But he insisted there was always full buy-in from his players who understood and were satisfied with the “trade off” between emptying themselves on the training field and improved results.

McGuinness guided Donegal to a second final in 2014 before stepping down to focus on a soccer role at Celtic, later moving into coaching in China and America.

Speaking in a webinar organised by the Modern Soccer Coach and North American Irish Coaches, McGuinness rubbished the idea that he flogged his players in order to develop a groundbreaking and ultra intensive counterattacking system.

“You see burnout is a really interesting one for me because burnout, is it a physical thing or is it a psychological [thing]?” said McGuinness.

“There’s people pushing their boundaries as hard as they can, like Ronaldo for example. He’s been going as hard as he can possibly go since he was 16 years of age and that doesn’t look like it’s abating. [Rafael] Nadal in the tennis, that’s probably the same, his body breaks down sometimes because he’s such a physical player. But don’t try to tell me that they feel burned out. They feel as hungry as ever before.

“I think if you get the right culture in place and people are there and people want to be there, and they also see that there’s a chance of being successful, I don’t think that’s an issue.

“See, one of the things for me is, there’s a difference between pushing people and this whole view of, you know, there was a lot of stuff in the media about Donegal when I was managing them, it was almost that we had the whip out and we were whipping the boys.

“That couldn’t have been further from the truth. Don’t get me wrong, we pushed them harder than anybody . . . than I could have imagined, but in a way where we were joining the dots between that and what we wanted to do on the pitch.

“And when they seen the trade off on the pitch they said, ‘Well, we couldn’t do that only for the work we were doing’. People then bought into it 100 per cent.”

McGuinness left Celtic in 2017 to work as assistant coach at Chinese Super League side Beijing Guoan and landed his first management role in the US in late 2018.

But just months into a three-year contract with Charlotte Independence in the second tier of American soccer he was sacked. McGuinness replied briefly when asked about his future plans and whether he might return to manage Donegal.

“That’s a good question,” he smiled. “Nobody knows where they’re going at the minute. The whole world has changed.”

It was then put to the last manager to overcome Dublin in a Championship game, back in 2014, that the Dubs would be happy for him to stay away.

“I doubt that very much,” grinned McGuinness.

McGuinness explained that all of those figures “are offering something that I can connect with”.

“Brian Cody, to me, was a guy who when they were winning all those All-Irelands, I thought he was ruthless about winning All-Irelands, that they could put it to bed so early the year afterwards and refocus,” he said. “That is a phenomenal trait. The same is expected at Celtic.”

McGuinness revealed his belief that despite soccer being “so well analysed” across the world, “a lot more can be done” with kick-outs.

He said top Gaelic football coaches have exploited the set-piece potential of kick-outs and reckons the same can possibly be done in soccer.

“In terms of my experience in Gaelic, maybe that’s one thing [to develop],” he said. “And it’s just about focus, our focus would have been on trying to score goals from kick-outs and I think there is something there, there’s something there that could be brought across.”

Explaining how he developed a high-intensity game plan for Donegal, resulting in them winning “most of our games from the third quarter”, he said it began at their first training session in late 2010.

He recalled an early hand-passing drill between two cones, 15 metres apart, which players had to complete at full intensity, “to be better placed to deal with really high-intensity matches”.

McGuinness said that after a period of time performing simple, basic drills at close to 100 per cent intensity, players realised, “we can look any team in the eye and say we can go toe to toe with you and take you”.