‘I was Nigel Dunne the footballer, and if I wasn’t doing well at that I was nothing’ 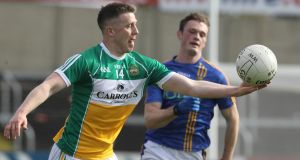 Nigel Dunne in action for Offaly against Wicklow in the 2018 Leinster championship. Photograph: Inpho

Nigel Dunne always dreamed of headlining national newspapers for his scoring exploits with the Offaly footballers. He was in no way prepared however for the negative media attention he received in the summer of 2018.

The Faithful County crashed out of the Leinster championship, beaten by Wicklow with Dunne taken off in the first half. He returned to the field after the interval and missed a crucial penalty.

Reports afterwards claimed he’d been at the centre of a half-time dressing room bust-up and had actually driven out of the stadium.

“I’m like everyone else, I’d have always loved to see my name in the paper – ‘Dunne scores a goal’ or something like that. But not this. I hated it, and I didn’t think I’d hate it, because in a weird way you want to be known,” explains the 30-year-old Shamrocks club man.

He told me he remembered looking at me that evening coming out of O’Moore Park, he was at the match as a spectator, and he said ‘you looked haunted’

“I left my job because of it. I was working at the front counter at the Credit Union and I literally could not stomach talking about football anymore after that. That’s all people coming into me wanted to talk about.

“I hate putting a label on whatever it was, or is, like I would’ve always felt that mental health stuff was for attention seeking and weak people but, I was completely wrong.”

The former Offaly sharpshooter insists he did not leave O’Moore Park. However, the incident had a major impact on his mental health over the following eight months: “That game scarred me, in that I actually went into myself after all the attention. I got sick of everything.

“I stormed out of the dressing room and walked down the corridor, I was down on my hunkers, I had a bit of a rant at the management, but I definitely didn’t leave the ground. I came back on and missed a penalty that cost us the game, which didn’t help everything.”

Following the defeat to Wicklow, Dunne and his Offaly team regrouped with a qualifier win against Antrim, and he reached the Leinster club intermediate final with Shamrocks later that year.

But for him, the shadow of that Wicklow defeat still lingered: “Paul Rouse, when he took over after the Wicklow match, was absolutely brilliant with me and really cheered me up. He said to me you know what, you actually went through a traumatic time Nigel and you don’t even realise it yet.

“He told me he remembered looking at me that evening coming out of O’Moore Park, he was at the match as a spectator, and he said ‘you looked haunted’. He thinks it took me two weeks to even communicate properly in training.”

Dunne scored 0-3 from play against Antrim, before being sent off, which ruled him out of the subsequent two-point defeat to Clare.

“I felt even worse as I’d let Paul down who’d invested time in me. And he was the last person I’d have wanted to let down.

“After that we were lucky enough to win the Senior B championship in Offaly with the club, and we got to a Leinster final but were beaten by a point, and definitely could’ve won it. I think losing that final brought back this sort of failing mindset, and I just didn’t want to face people again.

“I felt, if you’re failing at football, that’s what you’re known for. So I just needed to get things right in my head because the feelings that came in after that Wicklow game were coming back.

I told him I lied to him about why I didn’t come into the squad straight away, and the real reason is I’m a bit lost and I just need to sort out my own head

“To give a snapshot of my mind at the time – I went on the beer that night. I got up the next morning, got in the car and drove to Cork. Told no one. Went for like a half an hour run, drove on to Kerry.

“I came back at midnight that night, just crazy behaviour. I wasn’t contacting anyone, I just wanted to go through everything in my head a million times over.”

So when new Offaly manager John Maughan scheduled their first session for a few days later, he simply wasn’t ready. Dunne hasn’t played for Offaly in 12 months. Despite joining up with the squad and featuring in the 2019 league, he eventually walked out in March of last year. Maughan told the media at the time he was surprised to receive a text with the news.

“I opened up to John on the field one night in Kilcormac, I told him there’s personal sh*t going on in my life at the moment and I can’t focus on football. I told him I lied to him about why I didn’t come into the squad straight away, and the real reason is I’m a bit lost and I just need to sort out my own head.

“And he said grand, and that was one of the last few days of December. And from then to when I left the panel I don’t think we ever spoke directly.”

There’s been a couple of counties who’ve inquired, asking what’s my story. But for me it’s always been Offaly or nobody

Dunne received help from the Gaelic Players Association, who contacted him immediately after the incident in O’Moore Park. They’ve since provided over the phone guidance and organised a strength and conditioning coaching course that he’s currently completing with Setanta College.

“I stopped identifying myself as just a footballer. As then I was associating my happiness with football. I was Nigel Dunne the footballer, and if I wasn’t doing well at that I was nothing. So when I stopped doing that I found that everything got a little bit better, I actually have a balance now.

“But I hope I do play for Offaly again. There’s been a couple of counties who’ve inquired, asking what’s my story. But for me it’s always been Offaly or nobody.”