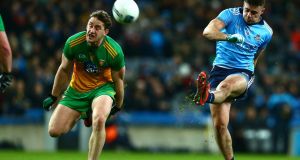 Brian Howard: has made a significant impact for Dublin since becoming a first-choice player in 2018. Photograph: Tom O’Hanlon/Inpho

Another Tuesday morning at Parnell Park, another commercial sponsorship for Dublin GAA, and after a few quick pleasantries Brian Howard is straightaway all chat. Why wouldn’t he?

Dublin may have lost their first league match of 2020 in the vicious rain and wind of Healy Park on Saturday night, but remain primed to make a league final, especially if Howard has his way.

He’s picked up where he left off last year as part of the two-stroke engine that is now the Dublin midfield, and doesn’t expect either team to face any further sanction after the half-time disturbance they suddenly whipped as they headed for the tunnel.

“If you’ve seen the video, I was first off [the pitch], so I actually was in the dressing-room, sitting down, and heard a bit of commotion,” says Howard. “It’s up to other people to investigate if they want.

“In my opinion there was nothing in it, just two competitive teams, and when you come in it’s a drawn game, with the conditions, and both teams aren’t playing particularly well, there are hot tempers. But no, there shouldn’t be any repercussions. You want to want to focus on the football, all that other stuff comes with it is a load of nonsense.”

Punches were definitely thrown, only it was hard to tell exactly who was throwing them. When they re-emerged for the second half, Tyrone midfielder Pádraig Hampsey was immediately black-carded by referee Cormac Reilly, and that may well be as far as it goes, given he was seen to deal with the issue at the time.

Howard sees no reason either to start separating teams as they head for their break. “No, I don’t think there should be anything really [changed] to be honest with you. It hasn’t happened in a long time. I’ve been playing for Dublin for three or four years and there’s been nothing like that.”

Howard concedes that Saturday night was a long way from Dublin’s best – not helped, though not accounted for, by the conditions.

“No, can’t say I have ever played in conditions like that. You had to alter the style in terms of bouncing the ball, soloing the ball, and the basic skills were a bit off for both teams. But we can’t have any excuses about the result, Tyrone just played the conditions better.”

With James McCarthy dropping into the half-back line in place of John Small, Howard again partnered his Raheny club mate Brian Fenton at midfield, where they both won All Star awards in 2018, Howard’s first full season with the Dublin seniors.

After Dublin’s five-in-a-row last summer, Howard received his second consecutive All Star, only this time at centre-back, and truth is he can shift between either position without any fuss. There is however some obvious advantages when playing alongside a club mate such as Fenton, who like Howard has never lost a championship match, the difference being he’s been there since 2015.

At age 23, Howard is three years younger than Fenton, and at 5ft 11in, seven inches smaller, only like Fenton he got his first big break with the Dublin under-21 team that won the 2017 All-Ireland, under current senior manager Dessie Farrell. He made a couple of senior appearances off the bench in 2017, replacing Fenton in the Leinster final win over Kildare, before becoming a first-choice player throughout 2018 and 2019.

Fenton did jest recently that he thought Howard was too small to play midfield, when clearly there is a special strength and synergy between the two.

“Well he [Fenton] is obviously going to that, given he’s 6ft 6in,” says Howard, speaking at the announcement of Kinetica Sports as official Dublin nutrition partner.

“I love midfield, but it’s changing [constantly], the opposition have different tactics and stuff like that. In previous years I played anywhere around the middle eight or even in the full-forward line. It just depends. You need to try to adapt. It is become a sport where you have to be fluid and very adaptable to different positions. Maybe if a wing-forward or someone gets a black card – maybe a wing-back has to go and fill that position.

“Getting those two little appearances [in the 2017 championship], that was huge for me, on a personal level and as a collective for the team. The following year I played O’Byrne Cup early in the year and I felt that I was able to get my match fitness up. I was working off the pitch to get ready for that, because I was hungry for the year ahead.

“But Brian has been a huge influence, big time. Having a club mate there was a huge boost for me. If there was someone in the dressing-room I could go to it would be him. He’d tell me how to do things, what’s expected of you on the pitch and off the pitch. And I have packed on the pounds now.

“And I did play with a lot of younger lads coming up, Eoin Murchan, Con O’Callaghan. Con was in the year before me after he finished 21s. So he was there and you could ask him for advice. That was a huge factor in making me feel comfortable and if you’re comfortable off the pitch you’ll be comfortable on the pitch so that helped for me.”