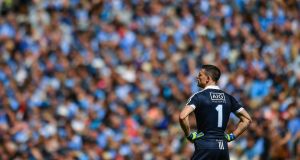 If and when he eventually hangs it up, Stephen Cluxton will retire with not just one of the great Gaelic football careers but one without many peers across Irish sport. The running total so far is seven All-Irelands, 15 Leinster titles, six All Stars, one Footballer of the Year – the numbers would turn your eyes square. If they were all he ever did, they’d be more than just about everyone who ever played.

But we know Cluxton did more than that. Along with Pat Gilroy, Jim Gavin and John Costello, he drove the change in the culture of Dublin football and the creation of the team that did the five-in-a-row. He started life in a Dublin set-up that was gleefully enjoyed by the rest of the country. When he goes, he’ll leave behind him a monster that has eaten the game whole.

And on top of all that, he has genuinely shaped his sport. Gaelic football at its sharpest end is a fundamentally different game now than the one that was played when he made his championship debut for Dublin in 2001. Cluxton didn’t just ride the wave of all the change – in particular and specific ways, he was nothing less than the wave itself. Even the true greats of any game don’t usually retire with that sort of label attached to them.

In that respect, it’s important to say what we mean. You have to check yourself when you make grand claims for a player in any sport. Particularly one with a long sweep through time like Gaelic football. If we say that Cluxton changed the sport, we can’t be blithe about it. We have to back it up.

So let’s go back. Back to when men were men and kick-outs were long. The earliest full Cluxton game to be found on YouTube is the 2006 All-Ireland semi-final against Mayo. He was five years into his intercounty career, three on from Tommy Lyons hanging him out to dry for his impetuousness in a qualifier defeat to Armagh.

At the age of 24, he had one All Star to his name and was about to win his second. He was a mainstay of the International Rules team. In short, he was established as one of the best goalkeepers in the country, with no threat to his ownership of the Dublin gloves.

Yet when you watch that Mayo game back, it may as well be in black and white. He was a different player and football was a different sport. He took 21 kick-outs that day in 2006 and Dublin only won 10 of them. A goalkeeper doing that in an All-Ireland semi-final these days would nearly be looking to the sideline to see if the sub goalie was warming up. Yet nobody held him up as a reason Dublin lost on the day and he cruised to the goalkeeper All Star at the end of the season.

Wouldn’t happen now. Couldn’t. For comparison, in last year’s drawn All-Ireland final, Cluxton took 25 kick-outs and Dublin won possession from 23 of them. His opposite number in the Kerry goal Shane Ryan took 23 and every one of them was secured. Two lost kick-outs across the space of an afternoon wasn’t seen to be outrageous, it was seen as the base level required for success. It’s what you needed to survive an All-Ireland final now.

What happened in the meantime? Cluxton happened. Here’s Jim McGuinness, talking in the aftermath of Donegal’s All-Ireland quarter-final win over Armagh in 2014. Next up for Donegal were the Dubs and McGuinness was already plotting their downfall. Much of what he had to say, therefore, ought to be seen through that lens and treated with appropriate scepticism. For our purposes, however, we can take at face value something he said about Cluxton that day.

“Stephen Cluxton’s stats are ridiculous,” McGuinness declared. “Dublin would look for between 70, 80, 85 per cent retention on their own kick-outs and that’s unheard of in Gaelic football. It gives them a huge platform, an opportunity to retain possession. They have very good foot-passers who can get the ball moving again. All of a sudden, five seconds later they are attacking and getting shots off. That’s where the relentlessness comes in.”

That’s the other huge difference when you compare the game now to the one that existed just five years into his time with Dublin. Watching back that 2006 game again, what really jumps out at you is the rampant dawdling of the goalkeepers when the ball goes out of play.

For the quickest kick-out Cluxton took in that 2006 game, the ball was back in play 20 seconds after the Mayo man took his shot. Those 20 seconds tally exactly with Cluxton’s slowest kick-out in the 2019 All-Ireland final replay. Take out stoppages for injuries, subs and cards and Cluxton’s average time over a kick-out in 2006 was just over 28 seconds. Do the same for last year’s final and that number drops to just under 14.

What do all these numbers mean? Simply this. That over the course of Cluxton’s career, Dublin reimagined the sport and made the kick-out something so much more important than merely a means of restarting the game. By taking their kick-outs quicker and retaining possession on more of them, they squeezed the margins and all but removed the element of chance inherent in the old kick-it-long days.

On the face of it, this might seem like a relatively small tweak to the norms of the game rather than any major fundamental change. But you only have to just count the number of rule changes surrounding the kick-out that have happened in the past decade to get a sense of how significant the change in emphasis has been.

Time was, a goalkeeper could knock a short one sideways or even backways to a loose corner back and gain handy possession that way. Not any more. Now all kick-outs have to be taken from the 20-metre line and all they have to go forward. And since Congress in February, a defender can’t pass a kick-out straight back to the goalkeeper any more either. The rulemakers have, by design, all but insisted that the ball must be kicked long.

You don’t need to be a rabid Hill 16 conspiratorialist to trace these rule changes back to Cluxton and the Dubs. Possession was the foundation stone of their dominance of the last decade. It was ten tenths of the law. Cluxton was guaranteed the ball 20 to 25 times a game – once he could guarantee possession from it, they were away. It rarely mattered how short he had to go with it, as long as they kept it. And as long as they did it at pace.

Quicker kick-outs mean less time for an opposition breather. But quicker kick-outs also place far more focus on the kicker. Not alone has he to be accurate, he has to be a supreme strategist. He has to be the best chess player in the team. He has to see around corners in a way goalkeepers were never asked to before Cluxton. Most of all, he has to do everything at speed – not just the kicking part but the thinking part too.

Nobody has been better at strategising the kick-out than Cluxton. Some day you’re at nothing, go back and check out the opening stages of the 2017 All-Ireland semi-final. Tyrone have just tapped over a free for their first score of the day and have pushed up en masse to press the subsequent kick-out. It is a clear statement of intent, a planted flag that tells Cluxton that they are coming for him.

It makes no difference to him. He sticks the ball on the tee and sends a lasered kick-out over them all, clearing Peter Harte’s despairing lunge and hitting Niall Scully in the chest on the Tyrone 65. He essentially puts the ball through a flaming tyre from 70 metres. The move ended in a Dublin free and Tyrone’s big move crumbles to dust.

You would not change the game in this way unless you had someone between the sticks capable of doing it. It’s de rigueur now, of course. It is demanded of all intercounty goalkeepers that they have a ping of a strike off the tee and that they be able to pick out the good choices and throw out the bad ones and still get attacks started inside 10-15 seconds.

When you’re not able to do it, it sticks out a mile. The big day of the 2019 summer was supposed to be Kerry v Mayo in Killarney, only for Peter Keane’s side to push 12 men into the Mayo half for David Clarke’s kick-outs and end the game before half-time. Dublin did the same to Rob Hennelly in the second half of the All-Ireland semi-final and he suffered the same fate. Everybody wants a Cluxton but there’s only one of him to go around.

It’s entirely possible that the game would have evolved that way eventually. But there was well over 100 years of goalkeeping before Cluxton came along and none of them saw the game through his eyes. He has set new parameters for all who come after him in the role.

Whatever his legacy in Dublin football, that will be some mark to leave on the game itself.

1 Ken Early: PSG would be sensible final move for Ronaldo
2 The Offload: Joe Schmidt the influencer is due a second act
3 A new breed of superstar - Collin Morikawa wins US PGA
4 Ronnie O’Sullivan: snooker’s next generation are ‘so bad’
5 Champions League quarter-finals: game by game verdicts
Real news has value SUBSCRIBE